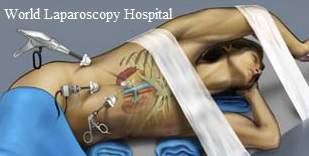 Nephrectomy is the surgical removal of a kidney. The surgery can be done as open surgery, with one incision, or as a laparoscopic procedure, with three or four small cuts in the abdominal and flank area. Recently, this procedure is performed through a single incision in the patient's belly-button. This advanced technique is called as Single Port Access Surgery.

The aim of this topic is to answer some of the commonly asked questions concerning the application of laparoscopic techniques to the surgical control. The techniques, instrumentation, and technologies listed in this topic represent some of the available options, but not all of them. New instruments and procedures emerge weekly, and the reader is cautioned that techniques used or preferred by a certain personnel may or may not work in every situation. Multiple companies manufacture multiple products, and awareness of the available options is vital to improving patients’ outcomes.

Procedure History: These well-established surgical principles should not be compromised in order for laparoscopic techniques to be accepted into urologic oncologic surgery. In 1991, the first LRN was performed. Since that pioneering report, the field of urologic laparoscopy has continued to expand and will be limited by only the imagination of interested urologists and the continuous improvement of instruments. Today, in a reasonable amount of time, reliably removing the kidney is possible, with successful cure of the cancer. Recent LRN series have given that shorter hospital stays, less pain, and an earlier return to normal activities. Moreover, recurrence and cancer-specific survival rates appear to compare favorably with those of open surgery series.

The traditional technique of open radical nephrectomy includes early vascular control of the renal hilum, removal of the kidney with the Gerota fascia intact, removal of the ipsilateral adrenal gland, and a regional lymph node dissection. Although the true benefits of adrenalectomy and regional lymph dissection in all patients with RCC have been debated, the principles of early vascular control and removal of the kidney with a wide margin of Gerota fascia remain the standard of care.

Advantages as reported, retroperitoneal LRN include quicker access to the renal hilum, easier dissection in obese individuals, the avoidance of intra-peritoneal irritation, and less interference with ventilatory and hemodynamic functions. Disadvantages include difficulty in entrapping the kidney in the sack in the smaller working space (in one series, 13% of cases had to be converted to intra-peritoneal for this reason) and difficulty in mastering the procedure. The trans-peritoneal approach has the advantages of being a very familiar approach with easily recognizable anatomy and a much larger working space. As suggested with given these advantages, urologists beginning their laparoscopic experience should choose the trans-peritoneal approach. These advantages are weighed against the longer reported operative times and the possibility of little more bowel injury during mobilization.

When considering hand-assisted surgery for radical nephrectomy, consider how the specimen is to be removed. If the kidney is to be morcellated and brought through a trocar site, perform one of the above approaches. If removing the specimen intact is desired, the hand-assisted approach allows use of the surgeon's hand for retraction and dissection, although very large tumors cannot be removed intact through a small hand-port incision. The price paid for a hand-assisted approach is an 8-cm incision, possibly more pain, and a slower recovery than a strictly laparoscopic approach allows.

Impact of the renal mass: Currently, laparoscopic radical nephrectomy (LRN) is best indicated for T1 (<7 cm) or T2 (>7 cm, limited to the kidney) cystic or solid renal masses. In the hands of an experienced surgeon, this can be broadened to include more extensive masses. Approaching large renal masses laparoscopically is a growing trend in patients with advanced disease in whom adjuvant immunotherapy is to be administered. The benefit has been earlier institution of therapy due to the shortened recovery time with the laparoscopic approach.

A laparoscopic approach can also be useful in patients who may have metastatic disease. This includes patients with renal masses or evidence of disease in the regional lymph nodes. Tissue is easily obtained from either site laparoscopically, sparing the patient a large incision.

Throughout the literature, practically all patients who had metastatic renal cell carcinoma (RCC) in the ipsilateral adrenal gland had either large renal masses (>T2) or mid- to upper-pole masses. Particular interest, metastases were more common on the left side, and only one of these occurred in a patient with a T1 lower-pole lesion (3.5 cm). Two reviews comment on the ability to predict the likelihood of adrenal metastasis based on preoperative imaging. In both reviews, no cases of adrenal metastasis were seen if the ipsilateral adrenal gland appeared normal on preoperative imaging (negative predictive value of 100%). Even if the adrenal gland appeared abnormal on staging workup, only 24-50% of patients actually had an adrenal metastasis. Based on these data, the current practice is to perform an adrenalectomy in patients undergoing LRN for T2 or larger renal masses or upper-pole tumors of any size.

One advantage of the trans-peritoneal approach to laparoscopic radical nephrectomy (LRN) is the familiarity of the anatomy to most urologists. An understanding of the ligaments at the upper and lateral borders of each kidney helps in colon mobilization and dissection of the upper renal poles. On the right, dividing the right triangular and part of the anterior coronary ligaments is usually necessary to fully visualize the upper pole. On the left, the upper pole is well visualized after division of the phrenicocolic, splenocolic, and the splenorenal ligaments at the splenic flexure. In addition, several ligaments that are attached to the anterior abdominal wall are often considered adhesions but actually represent very predictable ligaments.

Another useful anatomic detail to understand is the course of the ureter and gonadal vein and their relation to each other. Identification of these structures is vital because they can be followed superiorly to aid in hilar identification and dissection. At the level of the lower pole of the kidney and proximal ureter, the gonadal vessels are medial to the ureter. As they proceed inferiorly, they cross the ureter and become lateral as they exit the internal inguinal ring.

Current laparoscopic vascular control confines application of LRN to patients without inferior vena cava tumor thrombus. Cautiously approach patients with tumors classified as either T3a (involving perinephric tissue inside the Gerota fascia) or T4 (beyond the Gerota fascia) because no large series report long-term safety and efficacy data for these. Renal vein invasion is no longer a contraindication as long as the margin of patient vein is adequate near the vena cava. Because renal cell carcinoma (RCC) tumor thrombus does not often involve the wall of the vein, the thrombus can often be milked back toward the kidney to attain enough margins to staple or clip the renal vein near its junction to the vena cava. Closely examine this margin, either grossly or by frozen section, before completing the case.

Consider a history of prior renal or abdominal surgery a relative contraindication and individualize each patient's treatment based on surgical experience. Systematic conditions that must be considered include chronic obstructive pulmonary disease with hypercarbia, bleeding diatheses, ascites, and bowel obstruction.