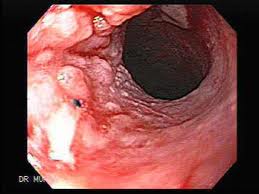 What is the esophagus?

Cancer begins in cells, the building blocks that make up tissues. Tissues make up the organs of the body. Normal cells grow and divide to form new cells as the body needs them. When normal cells grow old or get damaged, they die, and new cells take their place. Sometimes, this process goes wrong. New cells form when the body does not need them, and old or damaged cells do not die as they should. The buildup of extra cells often forms a mass of tissue called a growth or tumor. Growths in the wall of the esophagus can be benign (not cancer) or malignant (cancer). The smooth inner wall may have an abnormal rough area, an area of tiny bumps, or a tumor. Benign growths are not as harmful as malignant growths:

Esophageal cancer begins in cells in the inner layer of the esophagus. Over time, the cancer may invade more deeply into the esophagus and nearby tissues. Cancer cells can spread by breaking away from the original tumor. They may enter blood vessels or lymph vessels, which branch into all the tissues of the body. The cancer cells may attach to other tissues and grow to form new tumors that may damage those tissues. The spread of cancer cells is called metastasis.

There are two main types of esophageal cancer. Both types are diagnosed, treated, and managed in similar ways. The two most common types are named for how the cancer cells look under a microscope. Both types begin in cells in the inner lining of the esophagus:

When you get a diagnosis of cancer, it's natural to wonder what may have caused the disease. Doctors can seldom explain why one person develops esophageal cancer and another doesn't. However, we do know that people with certain risk factors are more likely than others to develop esophageal cancer. A risk factor is something that may increase the chance of getting a disease.

The following risk factors for esophageal cancer as mentioned:

Having a risk factor doesn't mean that a person will develop cancer of the esophagus. Most people who have risk factors never develop esophageal cancer.

Early esophageal cancer may not cause symptoms. As the cancer grows, the most common symptoms are:

These symptoms may be caused by esophageal cancer or other health problems. If you have any of these symptoms, you should tell your doctor so that problems can be diagnosed and treated as early as possible.

If you have a symptom that suggests esophageal cancer, your doctor must find out whether it's really due to cancer or to some other cause. The doctor gives you a physical exam and asks about your personal and family health history. You may have blood tests. You also may have:

If the biopsy shows that you have cancer, your doctor needs to learn the extent (stage) of the disease to help you choose the best treatment. >Staging is a careful attempt to find out the following:

Your doctor may order one or more of the following staging tests:

You may have a team of specialists to help plan your treatment. Your doctor may refer you to specialists, or you may ask for a referral. You may want to see a gastroenterologist, a doctor who specializes in treating problems of the digestive organs. Other specialists who treat esophageal cancer include thoracic (chest) surgeons, thoracic surgical oncologists, medical oncologists, and radiation oncologists. Your health care team may also include an oncology nurse and a registered dietitian. If your airways are affected by the cancer, you may have a respiratory therapist as part of your team. If you have trouble swallowing, you may see a speech pathologist. Your health care team can describe your treatment choices, the expected results of each, and the possible side effects. Because cancer therapy often damages healthy cells and tissues, side effects are common. Before treatment starts, ask your health care team about possible side effects and how treatment may change your normal activities. You and your health care team can work together to develop a treatment plan that meets your needs.

During surgery, the surgeon may place a feeding tube into your small intestine. This tube helps you get enough nutrition while you heal. You may have pain for the first few days after surgery. However, medicine will help control the pain. Before surgery, you should discuss the plan for pain relief with your health care team. After surgery, your team can adjust the plan if you need more relief. Your health care team will watch for signs of food leaking from the newly joined parts of your digestive tract. They will also watch for pneumonia or other infections, breathing problems, bleeding, or other problems that may require treatment. The time it takes to heal after surgery is different for everyone and depends on the type of surgery. You may be in the hospital for at least one week.

Doctors use two types of radiation therapy to treat esophageal cancer. Some people receive both types:

Side effects depend mainly on the dose and type of radiation. External radiation therapy to the chest and abdomen may cause a sore throat, pain similar to heartburn, or pain in the stomach or the intestine. You may have nausea and diarrhea. Your health care team can give you medicines to prevent or control these problems.

Most people with esophageal cancer get chemotherapy. Chemotherapy uses drugs to destroy cancer cells. The drugs for esophageal cancer are usually given through a vein (intravenous). You may have your treatment in a clinic, at the doctor's office, or at home. Some people need to stay in the hospital for treatment.

Chemotherapy is usually given in cycles. Each cycle has a treatment period followed by a rest period. >The side effects depend mainly on which drugs are given and how much. Chemotherapy kills fast-growing cancer cells, but the drug can also harm normal cells that divide rapidly:

Other possible side effects include a skin rash, joint pain, tingling or numbness in your hands and feet, hearing problems, or swollen feet or legs. Your healthcare team can suggest ways to control many of these problems. Most go away when treatment ends.

Your health care team may suggest one or more of the following options:

Cancer and its treatments may cause pain. It may be painful to swallow, or you may have pain in your chest from the cancer or from a stent. Your health care team or a pain control specialist can suggest ways to relieve or reduce pain.

Information about eating before, during and after surgery is provided in this section. It's important to meet your nutrition needs before, during, and after cancer treatment. You need the right amount of calories, protein, vitamins, and minerals. Getting the right nutrition can help you feel better and have more energy. However, when you have esophageal cancer, it may be hard to eat for many reasons. You may be uncomfortable or tired, and you may not feel like eating. Also, the cancer may make it hard to swallow food. If you're getting chemotherapy, you may find that foods don't taste as good as they used to. You also may have side effects of treatment such as poor appetite, nausea, vomiting, or diarrhea. If you develop problems with eating, there are a number of ways to meet your nutrition needs. A registered dietitian can help you figure out a way to get enough calories, protein, vitamins, and minerals:

A registered dietitian can help you plan a diet that will meet your nutrition needs. A plan that describes the type and amount of food to eat after surgery can help you prevent weight loss and discomfort with eating. If your stomach is removed during surgery, you may develop a problem afterward known as the dumping syndrome. This problem occurs when food or liquid enters the small intestine too fast. It can cause:

There are steps you can take to help control dumping syndrome:

Also, your health care team may suggest medicine to control the symptoms. After surgery, you may need to take daily supplements of vitamins and minerals, such as calcium, and you may need injections of vitamin B12.

You'll need checkups after treatment for esophageal cancer. Checkups help ensure that any changes in your health are noted and treated if needed. If you have any health problems between checkups, you should contact your doctor. Checkups may include a physical exam, blood tests, chest x-ray, CT scans, endoscopy, or other tests.

Esophagus Cancer at a Glance