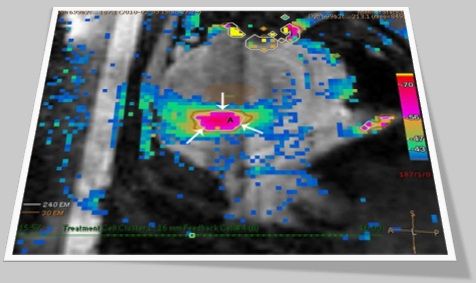 Uterine fibroids (leiomyomas or myomas) are the most common neoplasms of the female pelvis. These benign tumors arise from the smooth muscle cells of the uterus, are generally oval shaped, are often highly vascular, and occur in up to 50% of women of reproductive age. Their size can range from few millimeters to 10 cm or more. Fibroids, particularly when small, may be entirely asymptomatic. Important symptoms include abnormal gynecologic hemorrhage, heavy or painful periods, abdominal discomfort or bloating, painful defecation, backache, urinary frequency or retention, and in some cases, infertility. There may also be pain during intercourse, depending on the location of the fibroid.

Uterine fibroids are often multiple, and if a uterus contains too many leiomyoma to count, it is referred to as “diffuse uterine leiomyomatosis.”

Measures of the clinical success of fibroid treatment are subjective and thus evaluated by the patient in terms of rapid and long-lasting improvement in the symptoms that caused her to seek treatment (decrease in pain, bladder, or bowel symptoms or reduction in vaginal bleeding) along with a minimum of adverse effects from the treatment itself. 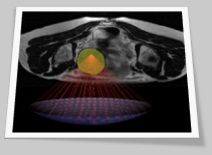 Focused ultrasound therapy is a treatment option for uterine fibroids - noncancerous growths of the uterus. The procedure is noninvasive and preserves your uterus. Focused ultrasound surgery - also called focused ultrasound ablation - is performed while you're inside a magnetic resonance (MR) scanner equipped with a high-energy ultrasound transducer for treatment. During the procedure, MR images give your doctor the precise location of the uterine fibroids to be treated and the locations of nearby structures, such as the bowel and bladder, to be avoided. Then the ultrasound transducer is used to send focused sound waves (sonications) into the fibroid to heat and destroy small areas of tissue. A pelvic magnetic resonance imaging (MRI) scan is typically performed before treatment to determine whether you're a good candidate for focused ultrasound surgery.

Focused ultrasound surgery is performed to ease bothersome symptoms associated with uterine fibroids, including heavy bleeding and pelvic pain and pressure. The procedure provides a noninvasive alternative to surgical treatment of fibroids. Although focused ultrasound surgery offers many advantages over other fibroid treatment options, it's not the best option for everyone. It may not be a good choice for you if your fibroids are located behind heat-sensitive organs, such as your bowel. This treatment isn't intended for women who desire a future pregnancy. Long-term effects on a woman's ability to become pregnant and carry a fetus to term have not been studied adequately yet; however, a number of women have had successful pregnancies after treatment.

One of the most common surgical treatments is hysterectomy (removal of the uterus), which can be performed via traditional surgery or laparoscopically. Another option is myomectomy (surgical removal of only the fibroid), which is preferred in cases that require a uterus-conserving approach (e.g., to maintain future fertility), and this can also be done via traditional surgery or laparoscopically.

Benefits and Risk of Focused Ultrasound:

The potential benefits of using focused ultrasound to treat symptomatic uterine fibroids are:

Other drawbacks of MR-guided focused ultrasound surgery include:

Therefore it may be concluded that Focused ultrasound could: be the ultimate form of noninvasive surgery, destroy tumors without making any incisions and without harm to other organs, replace the need for most radiation treatments, transform pharmacological therapy by delivering drugs precisely where needed without harm to the rest of the body, dissolve blood clots and restore flow through blocked vessels, Focused ultrasound therapy can be performed on an outpatient basis, requires no incisions or general anesthesia (only mild sedation), results in minimal discomfort and few complications and allows for rapid recovery.