The tubal ring also popularelly called the Falope ring, is a small silastic ring shaped band placed around a loop of the fallopian tube. With this method of tubal ligation, a 2-3 cm segment of fallopian tube is drawn inside a narrow cone-shaped applicator. The silastic ring that previously has been stretched over the outside of the applicator is then released onto the tubal loop. As the falope ring contracts due to its elasticity, it constricts the base of the loop and blocks the fallopian tube. Deprived of its blood supply, the constricted loop is replaced with scar tissue, and the remaining healthy tubal segments separate, similar to the old Pomeroy tubal ligation method used by open technique.

How Falope Ring is applied?

After informed consent, the patient who want tubal sterilization by falope ring is taken to the operating room where general anesthesia should be administered. She should be placed in the dorsal lithotomy position and prepped and draped in sterile fashion. bivalve speculum should be placed in the vagina, and the anterior lip of the cervix is grasped with a single toothed tenaculum. An infra umbilical incision was made with a scalpel, then while tenting upon the abdomen, a veress needle should be introduced into the abdominal cavity. A saline drop test is performed and noted to be within normal limits. Pneumoperitoneum with quadromanometric insufflator should be attained with 2 to 4 liters of carbon dioxide depending upon size and laxicity of abdominal wall. The veress needle is removed after achieving adequate pneumoperitoneum, and a 10 mm trocar is introduced into the abdominal cavity while tenting up on the abdomen. 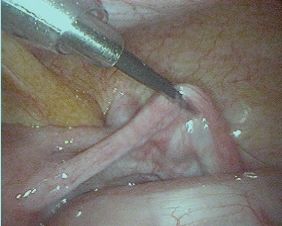 The laparoscope was inserted and proper location of its intra abdominal access is confirmed. A second incision is made 2 cm above the symphysis pubis or in left iliac fossa and a 5 mm trocar and cannulla is inserted into the abdomen under laparoscopic visualization without complication. A diagnostic survey revealed normal pelvic and abdominal anatomy. The patient should be examined under anesthesia and diagnostic laparoscopy should be done to see a normal uterus with normal adnexa.

A Falope ring applicator is introduced through the second port, and the left Fallopian tube is identified, followed out to the fimbriated end, and grasped 2 to 4 cm from the cornual region. The Falope ring is applied to a knuckle of tube and good blanching should be noted at the site of application. No bleeding should occur if no traction will be given to meso salpinx which should be carefully observed from the mesosalpinx. The Falope ring applicator should be reloaded, and a Falope ring is applied in a similar fashion to the opposite tube. Carbon dioxide was allowed to escape from the abdomen. All the port should be removed and the 10 mm port site would should be carefully closed.

Is there any side effect of this procedure of tubal sterilization?

Expect complete healing without complications with sterility for rest of the life there is no side effect. The menstrual periods will continue as usual. Allow about 2 weeks for recovery from surgery and its mild pain.

fter tubal ligation will female be remain as feminine?

The hormones that affect hair, voice, sex drive, muscle tone, breast size, etc., are still made in ovaries. They will still flow throughout the body in the bloodstream. So patient will remain completely normal. A tubal ligation doesn't affect your menstrual cycle.

If family is not complete and female is thinking about reversal, don't have a tubal sterilization. Reversal procedures require complicated laparoscopic tubal re canalization surgery and cost thousands of dollars. Even though fallopian tubes can sometimes be anatomized, pregnancy cannot be guaranteed. Many young women in reproductive age cannot even attempt reversals because there is not enough of their tubes left in the reproductive tract.