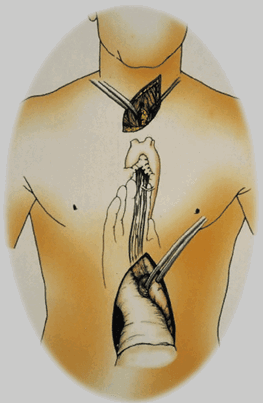 An esophagectomy is surgery to get rid of part or even the entire esophagus. After it can be removed, the esophagus is rebuilt from section of your stomach or part of large intestine or the patient. The key objective would be to eliminate the esophagus, a part of the gastrointestinal tract ("food pipe"). This procedure is usually done thoracoscopically for patients with esophageal cancer. It is normally done to remove cancerous tumors through the body. Esophagectomy should be best done thoracoscopically when an esophageal cancer is detected early, before it's spread. If taken up early on, an esophagectomy might prove to be life saving. Despite significant improvements in technique and postoperative care, the future survival for esophageal cancer remains poor. Currently multimodality treatment is needed chemotherapyand radiation therapy for advanced tumors. Esophagectomy is additionally occasionally performed for benign disease like esophageal atresia in kids, achalasia, or caustic injury.

Esophagectomy by thoracoscopic route is a very complex operation which will take between 4 and 8 hours to perform. It is a good idea done exclusively by doctors who specialize in upper gastrointestinal surgery. Anesthesia on an esophagectomy can also be complex issue and should be done by an experience anaesthetist, as a result of the down sides with managing the patient's airway and breathing throughout the operation. Lung collapse is extremely probable in addition to losing aim of diaphragm and possible injury of the spleen.

Average mortality rates for esophagectomt operation are around 10%. However recognized major cancer hospitals in developed country typically report mortality rates under 5%. Major complications appear in 10-20% of patients, and some form of complication (major and minor) happens in 40%. Time in hospital is often 1-2 weeks and recovery time 3-6 months. It will be possible for your recovery time to take up with a year.

There are two main forms of esophagectomy:

After removal of esophagus typically, the stomach is transplanted in to the neck and also the stomach takes the best place originally occupied with the esophagus. Sometimes, the removed esophagus is replaced by another hollow structure, like the patient's colon. Nowadays the better choice which can be slowly becoming available more widely is non-invasive surgery (MIS) that's performed laparoscopically and thoracoscopically.

After surgery, patients could possibly have trouble with a normal diet and may even ought to consume softer foods, avoid liquids at meals, and turn into upright for 1-3 hours after enjoying. Dysphagia is typical and patients should preferably chew foods very well or grind their food. Patients may complain of substernal pain that resolves by sipping fluids or regurgitating food. Reflux-type symptoms may be severe, including intolerance to acidic foods and big, fatty meals. Jejunal feeding tubes may be placed during surgery use a temporary route of nutrition until oral eating resume.

Esophagectomy is major surgery and possesses many possible risks. Many of them are serious. The patient should discuss these risks along with surgeon. The potential for loss from this surgery, or for problems after surgery, may be greater than normal if:

Esophageal cancer surgical treatment is invasive and connected with a high incidence of complications. Although improvements happen to be stated in surgical maneuvers and perioperative care, serious complications still occur after esophageal cancer surgery. Recently, thoracoscopic surgery may be gaining interest being a noninvasive surgery. Because this technique of surgery involves only minimal cutting in the intercostals, respiratory function could be retained, which will slow up the incidence of pulmonary complications like pneumonia and atelectasis. Furthermore, the pre-sternal and retro-sternal routes have often been selected for pathway reconstruction before due to chance for fatal suture failure. Recently, however, conditions physiological posterior mediastinal pathway has grown because of advances for example automated anastomotic devices and a lowering of the incidence of anastomotic sufficiency. Currently, a consensus has not been obtained due to the differences between facilities, including preoperative and postoperative management along with the surgery itself.

Within World Laparoscopy Hospital, the conventional surgical treatment has become thoracoscopic subtotal esophagectomy from a semi-pronated position and laparoscopic gastric surgery, gastric conduit elevation to the neck using the posterior mediastinal pathway, and anastomosis and reconstruction in the cervical esophagus and gastric conduit at intervals of end. Until now, the created gastric conduit may be protected in a echo probe cover and, after completing thoracoscopic manipulation, sown on the ventral side with the polyester tape, which was placed through the abdomen to the neck, and blindly elevated to the neck. However, when this elevation strategy is used, the gastric conduit adheres on the azygos vein and bronchial arteries and poses a danger of major bleeding. With this method of gastric conduit elevation we have used, which may be performed to lessen potential risk of bleeding.

The stomach is easily the most popular organ in esophageal reconstruction after subtotal esophagectomy. Once the stomach is judged unsuitable, small intestine or colon is utilized through the anterior or posterior sternal route or even the posterior mediastinum route. All these organ reconstruction and route reconstruction possesses its own advantages and disadvantages and differs in accordance with the hospital. Recently, an increasing number of facilities use the posterior mediastinum route since it offers physiological advantages and short reconstruction distance. The gastric conduit is blindly opened up for the neck, where an anastomosis connects it on the ventral side from the polyester tape which has been placed from the abdomen on the neck via the posterior mediastinal route, after completing thoracoscopic manipulation. However because the gastric conduit is blindly elevated intrathoracically, twists inside the gastric tube and damage including vascular harm to other organs can be a risk. Inside the cases of esophageal cancer we have operated on so far, we performed thoracoscopic subtotal esophagectomy in the semipronated position and reconstructed the posterior mediastinal route by using the stomach. However, few cases involved someone who sustained problems for the right bronchial artery during elevation in the gastric conduit and suffered major bleeding. Fortunately, as the bleeding had stopped once the thoracic cavity was thoracoscopically examined again, we clipped each stump with the bronchial artery, as well as the surgery was completed without the need for blood transfusion. However, after this experience, thought that it turned out important to construct some form of device to prevent similar problems later on.

Surgical experience of renowned laparoscopic surgeons of all over world with thoracoscopic and video-assisted esophagectomy indicate that it is a feasible and useful procedure. This method is regarded as for everyone as a useful way of gastric conduit elevation as No perioperative complications such as bleeding or futility of the gastric conduit elevation were recognized using this method.