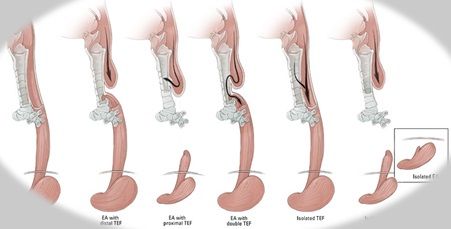 This birth disability develops in the fourth week of pregnancy, when the trachea and esophagus should initiate to disparate from each other. It can be linked with disabilities of the tracheoesophageal septum. Esophageal atresia is a disease of the digestive system in which the esophagus does not fully mature. The esophagus is the tube that normally takes food from the mouth to the stomach.

Some indications regarding esophageal atresia disorder are:

The infant may breathe saliva and other fluids into the lungs, causing aspiration pneumonia, choking, and possibly death.

Other complications may include: 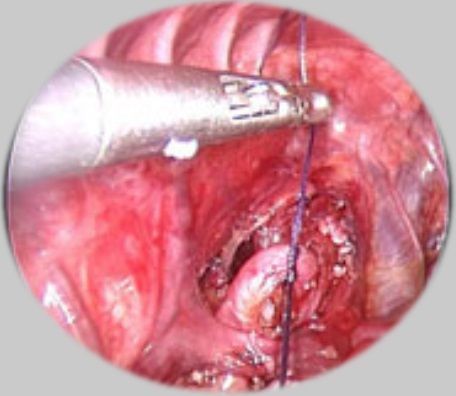 Treatment options for the problem appear differently relies upon on its intensity. As a rule, a child's own esophagus is better than any substitution. The most prompt and valuable treatment in the most of situations is a surgical mending to enclose the fistulas and rejoin the two points of the esophagus to each other. Whereas this is typically done by a cleft within the ribs on right side of the baby, an approach applying three tiny clefts that is thoracoscopy is being utilized at some centers. In a minority of cases, the space within upper and lower esophageal segments may be very large to bridge. In some of these so-called huge space cases, although, a sophisticated surgical treatment created may be used to enlarge and then linked together the small esophageal segments. Using the this technique, surgeons place traction sutures in the tiny esophageal ends and increase the tension on these sutures daily until the ends are close enough to be received together. The result is a general functioning esophagus, virtually identical from one congenitally well formed. Unfortunately, the results have been somewhat difficult to replicate by other surgeons and the need for multiple operations has tempered enthusiasm for this approach.

The use of colonic left chest or substernal, gastric pull-up, or jejunal vascularized graft segments is also used to repair oesophageal atresia but it is difficult and should be based on the condition of the infant, the pathologic anatomy, associated defects of suffering child eg, gastric pull-up is usually contraindicated in significant cardiac disease, most of the pediatric surgeons are agree that colonic esophageal replacement is usually contraindicated with concomitant imperforate anus, and the pull through surgery prognosis also depends on the surgeon's experience.

Post operative health concerns are occasionally developed, containing a flow at the site of closing of the esophagus. Sometimes a factor, or restricted stain, will produce in the esophagus, making it problematic to digest. This can normally be enlarged using medical instruments. In future, most children with this disability will have some problems with either digesting or heartburn or may be both.

Tracheomalacia is another possible complication after repairing from this disorder that is the softening of the trachea, usually above the carina but sometimes extensive in the lower bronchial tree as well. A diversified treatments for tracheomalacia linked with esophageal atresia are available. If not serious, the problem can be handled hopefully because the trachea will generally brace as the infant matures into the first year of life. A well-recognised complication of esophageal atresia surgery is the persistence of a tracheal pouch with pooling of secretions leading to significant cough, aspiration, pulmonary soiling and acute life-threatening events.