What To Eat After Gastric Bypass Surgery?

Gastric bypass surgery is among the most popular bariatric surgery, with the number of those who are choosing to undergo the procedure doubling since 2001 to 2003. The American Society of Bariatric Surgery, estimates the number to be 140,000 annually. This procedure is primarily done to resolve issues of morbid obesity and the diseases associated with it. In gastric bypass surgery, a small pouch is created in the stomach. This small pouch is stapled and the small intestine’s upper portion is also attached to this small pouch. The middle section of the small intestine is attached to the rest of the stomach. Food will bypass the rest of the stomach and the rest of the small intestine. Te stomach will be in smaller size which would make it full faster. Less calories will be absorbed. This procedure would require diet change. Since the digestive system is altered or shortened, every food intake would be valuable. Some common side effects brought by the surgery is nutritional deficiency like anemia and osteoporosis. This is why it is important for patients to follow a different diet and take mineral and vitamin supplements.

The special gastric bypass diet would make sure that weight loss will be maintained over time. It would normally involve high protein food. Foods high in protein would ensure that new tissues are being built and the wounds are healing properly. Ideal high protein foods will be low in fat like red meat, chicken or turkey without skin, fish, eggs and cottage cheese.

Sugar and fat is among the foods that are avoided. Gastric bypass diet would involve food low in sugar and fat. Sugary foods are high in calories and fat. Fat is difficult to digest. Consuming too much sugar could also result to the Dumping syndrome that has nausea, dizziness, vomiting, sweating, and diarrhea as symptoms. The body could also react the same way to too much fat. Foods with too much fat and sugar, anyway, do not have sufficient nutrients that would be essential to the body. 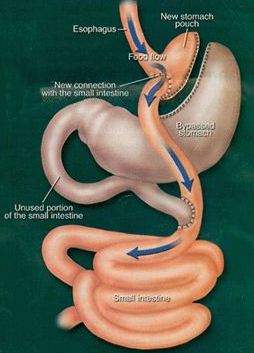 Foods high in fiber are also limited in gastric bypass diet. Fibers could block the stomach, small intestine and would require more gastric acid to digest it. A doctor’s approval is needed before ingesting any laxative or fiber pills.

This change is not done immediately. There are stages in a gastric bypass diet. Clear liquids would be the first stage. For the first two days, clear liquids like water, sugar-free juice, clear broth and no fizz soda are consumed in small amounts. Within the first two weeks, low-fat, high protein liquids are ingested. It is important to also take chewable multivitamins during this stage.

Type of Foods to Eat After Gastric Bypass Surgery

Rapid weight loss is possible, thanks to a surgical procedure called the gastric bypass. In essence, this weight loss surgery reduces the size of a part of the stomach and connects it to the small intestine. By doing so, it prevents overeating and helps gain satisfaction after eating small meals. After the surgery, the stomach volume becomes smaller and, as a result, can contain only 1 ounce of food (which stretches to 8 ounces over time).

Have you gone through weight loss surgery? Because of the changes in your digestive system, you need to follow a diet after the surgery. You also need to consult a registered dietician to know the foods you must eat, how to eat them, and how much to eat. Your post-surgery diet must be planned carefully to avoid sudden weight gain and other complications such as vomiting. Also, the right diet helps shorten the recovery period, ease pain on the surgical areas, and adjust your body to the changes in eating habits.

For the first two days after your surgery, eating is not allowed. Then after several months, you are required to eat certain foods that vary in softness and texture. Weight loss surgery patients follow a diet progression that begins with liquids and proceeds to pureed foods and soft foods. The first phase is the liquid diet consisting of water, milk, juice, broth, and soup. It is followed by three to four weeks of puree diet that includes foods with a texture of a thick liquid or a smooth paste.

Examples are yogurt (low fat or sugar free), oatmeal, pureed meat, and pureed fruits, among others. The third phase is an eight-week soft diet that consists of foods that are easy to chew such as fresh fruits, ground meats, and cooked vegetables. Afterwards, you can move on to the last phase, which is the solid diet. Just be sure to avoid overeating and skipping meals. Usually, every meal should include foods rich in protein such as cheese, lean meat, and eggs. You need protein because it helps in repairing and maintaining the tissues in your body after the surgery. After the surgery, it is recommended that you start with six small meals everyday. After a few weeks, move on to four meals a day and then reduce it to three meals a day once you have started following a regular solid diet. The rate at which your body adjusts to the new diet and eating habits determines how fast you must proceed from one diet phase to another. Most patients begin eating solid foods three months after the surgery, but for some, it can happen sooner. When complemented with regular exercise, following the right diet leads to a 50 to 60 percent weight loss two years after the surgery. What’s more, you enjoy the weight loss benefits of the surgery for good of you consistently maintain the right diet. Of course, there’s a price to pay for not following the doctor’s or dietician’s recommendations on diet and exercise. Weight gain is the usual result of bad health practices such as lack of exercise, overeating, and high-calorie food and beverage intake. If it happens to you, visit your doctor to discuss the possible solutions. That way, you will be able to get the most out of gastric bypass surgery.Doctors would determine when would be the suitable time for the patient to progress to soft or puree diet. Some would be able to eat after two weeks, while others would have to wait longer than that. Some people who are in this stage would sometimes resort to eating strained baby foods. While others would prefer eating soft foods like scrambled eggs, low-fat cheese, blenderized lean meats, etc.Two months after the surgery, the patient could now start eating regular diet, starting with high-protein food. Food consumed should be in small amounts. Remember that the stomach is reduced in size. After the gastric bypass, the stomach could accommodate about an ounce of food. Eventually, it could stretch and hold about 4 to 8 ounces or a cup to half a cup of food. One thing that people should be conscious of would be overeating. Gastric bypass surgery can make the stomach smaller, however this does not affect the overall attitude to eating. People could result to overeating because of genetics or emotions. Lifestyle change is important. Overeating could cause regaining the lost weight, expansion of the pouch, and in worst cases rupture of the stomach. There are many support groups, education, and counselling available to help deal patients with these difficulties.

Why Go for Gastric Bypass Surgery?

Over 72 million adults in the United States are obese. Besides this disturbing figure lies a bigger problem: the life-threatening diseases that are linked to obesity. These obesity-related health problems include hypertension, hyperthyroidism, sleep apnea, and diabetes. For many obese people, gastric bypass or weight loss surgery is the best and fastest solution to their weight problem.

Your Kidney And Gastric Bypass

The number of people suffering from obesity every year is increasing, it is mainly about the lifestyle and how people eat. To avoid the risks of obesity, more and more people are looking for other options for rapid weight-loss. About 140,000 people annually are finding gastric bypass surgeries an option for weight-loss and reducing obesity and its health complications. Roux-en Y is the most common gastric bypass. In this procedure, a small and upper section of the stomach is separated by staples or bands to create a small pouch. This would limit the amount of food the patient could consume. It could hold about an ounce of food but can expand to about 4 to 8 ounces of food after a few months. A Y-shaped section of the small intestines is attached to the stomach. This would allow the food to bypass the upper portion of the intestines.

There are many benefits brought by gastric bypass surgery. Individuals who have undergone the procedure are said to reduce their weight with an average of 50 to 60%. Some would lose about 80% of their body weight two years after the sugery. Diabetes, hypertension, high cholesterol levels and even cancer risks can be reduced by the procedure. However, there are also downsides with this surgery. Gastric bypass surgery is an effective way of losing weight an obesity related health risks. However, there are studies showing concern about nephrolithiasis or the formation of kidney stones among those who have undergone gastric bypass surgery. According to paper presented in the 39th Annual Meeting and Scientific Exposition of American Society of Nephrology, gastric bypass surgery increased the possibility of kidney stones. Actually, this was not the first time that this kind of risk is identified with almost similar operations. In 1979, the Food and Drug administration had the jejunal ileal bypass under moratorium. This was because patients who had the procedure developed kidney stones five years after surgery. Currently, there are studies showing that those who have undergone gastric bypass surgery would experience changes in the chemical composition of their urine. These changes eventually can lead into formation of kidney stones. After the gastric bypass surgery, the level of oxalate increased. This chemical when bound with calcium can cause the increase of kidney stones. Another cause could be the production of low levels of citrate. Citrate dissolves crystals which can cause kidney stones. Low citrate levels and high levels, a combination that leads to an increase of calcium oxalate supersaturation. This increases or a strong factor or risk for having kidney stones. Other chemicals which also contribute to kidney stone formation like uric acid and potassium remains unchanged before and after the surgery. A study conducted by Mayo Clinic showed that those who have underwent the procedure for the last six months have not developed this kind of chemical change. This condition could be avoided or the risk be reduced by undergoing some dietary changes. Doctors would recommend an increase on the intake of fluids, low-protein and low-salt diet, and normal calcium diet.