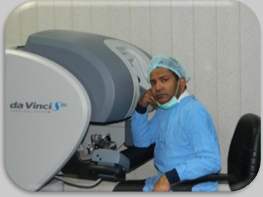 da Vinci robot is a state-of-the-art surgical platform that provides surgeons with 3D, high definition vision of the patient’s anatomy and its patented instruments provides a range of motion far beyond the abilities of the human hand. By overcoming the limits of both traditional open and laparoscopic surgery, da Vinci is changing the experience of surgery for people around the world. 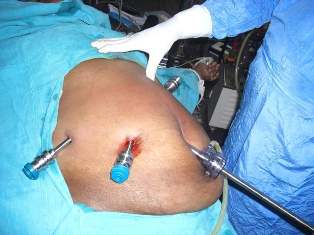 The da Vinci Surgical Product is a robotic surgical system made by Intuitive Surgical and made to facilitate complex surgery utilizing a non-invasive approach. The machine is controlled with a surgeon from a console. It's popular for prostatectomies, and increasingly for cardiac valve repair and gynecologic surgical procedures. The da Vinci System consists of a surgeon’s console that is typically within the same room as the patient and a patient-side cart with four interactive robotic arms controlled in the console.

Three of the arms are for tools that hold objects, act as a scalpel, scissors, bovie, or unipolar or dipolar electrocautery instruments. The fourth arm is for an endoscopic camera with two lenses that provides the surgeon full stereoscopic vision from the console. Choices sits in the console and appears through two eye holes at a 3-D image of the procedure, meanwhile maneuvering the arms with two foot pedals and two hand controllers.

The da Vinci System scales, filters and translates the surgeon's hand movements into more precise micro-movements of the instruments, which operate through small incisions in your body. Based on the da Vinci System is called "da Vinci" in part "because Leonardo da Vinci invented the very first robot", and also because he used anatomical accuracy and three-dimensional details to bring his actively works to life.To perform a procedure, choices uses the console’s master controls to move the patient-side cart’s 3 or 4 robotic arms (depending on the model), which secures the instruments and a high-resolution endoscopic camera. 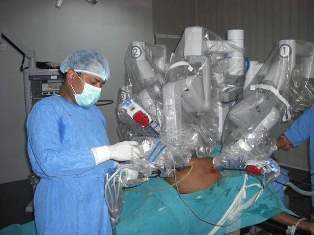 The instruments’ jointed-wrist design exceeds the natural range of motion from the human hand; motion scaling and tremor reduction further interpret and refine the surgeon’s hand movements. The da Vinci System incorporates multiple, redundant safety features made to minimize opportunities for human error in comparison with traditional approaches. Never may be the surgical robot in charge or autonomous; it operates on a "Master:Slave" relationship, the surgeon being the "Master" and also the robot being the "Slave." The da Vinci System has been designed to improve upon conventional laparoscopy, where the surgeon operates while standing, using hand-held, long-shafted instruments, without any wrists. With conventional laparoscopy, choices must lookup and from the instruments, to some nearby 2D video monitor to see a picture of the target anatomy. The surgeon must also rely on his/her patient-side assistant to position your camera correctly.

In comparison, the da Vinci System’s ergonomic design allows the surgeon to operate from a seated position at the console, with eyes and hands positioned in line with the instruments. To maneuver the instruments or to reposition the camera, choices simply moves his/her hands. By giving surgeons with superior visualization, enhanced dexterity, greater precision and ergonomic comfort, the da Vinci Surgical System makes it possible for more surgeons to perform minimally invasive procedures involving complex dissection or reconstruction. For that patient, a da Vinci process could offer all of the potential advantages of a minimally invasive procedure, including less pain, less hemorrhaging and less requirement for blood transfusions. Moreover, the da Vinci System can enable a shorter hospital stay, a quicker recovery and faster go back to normal daily activities.

The robot costs normally $1.7 million in addition to several hundred thousand dollars of annual maintenance fees. Surgical treatments performed using the robot take longer than traditional ones. Critics say that hospitals have a problem recovering the cost which most clinical data doesn't support the claim of improved patient outcomes.