Obesity is one of the most diseases that considers as a global health problem, with a prevalence of >20% among the adult population in Western countries and >30% in the USA.1,2 The  incidence of overweight and obesity has increased and it’s  been identified as an epidemic associated with an increase in the diseases related to obesity, such as  coronary heart disease, type 2 diabetes, hypertension, dyslipidemia, stroke, obstructive sleep apnea, osteoarthritis and polycystic ovary syndrome. Recent a lot of studies on cancer prevention found that increased body weight was associated with an increased death rate for all cancers combined and for cancers at multiple specific sites. Thus, high body mass index (BMI) is a risk factor for higher overall mortality.Clinicians all over the world have long been aware of the impact of obesity on health, functioning and well-being. In search of effective solutions, morbidly obese patients are increasingly turning to bariatric surgery.

There are a lot of bariatric surgeries to a chive the desirable weight loss but the restrictive procedures are more popular as Gastric banding (GB). it is characterized by minimal invasivity, total possibility of reversibility and good weight loss at long-term. On the other hand, Sleeve gastrectomy (SG), described by Hess and Marceau since 1988 during the procedure of duodenal switch and since 1993 by Johnston in an isolated form, is a less common restrictive operation for obesity, with major invasivity and a longer learning curve than GB. 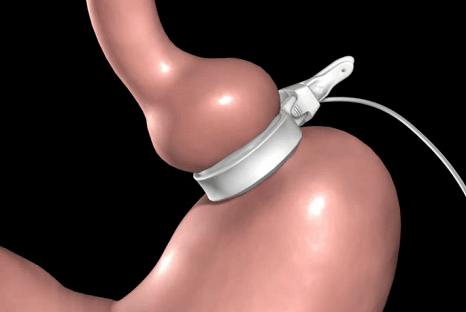 Laparoscopic Gastric banding ( GB ) Described in 1993 by Catona, is a surgical option that involves placing a silicone band circumferentially around the uppermost aspect of the stomach. The band creates a small proximal pouch that empties slowly resulting in early satiety and a decreased appetite. The band is attached to an access port that is secured to the rectus muscle and can be accessed percutaneously in the office with a needle. Injection of saline into the port results in tightening of the band. This is performed on an individual basis according to weight loss and appetite. It’s the most popular in Europe while in USA it has been approved by FDA in 2001.

Sleeve Gastrectomy (SG) described by Hess and Marceau since 1988 during the procedure of duodenal switch and since 1993 by Johnston in an isolated form, consists of vertical gastric resection of 80% capacity with exeresis of the fundus and body of the stomach linearly from the Hiss angle to 3–4 cm from the pylorus using Endo GIA staplers, which leaves a gastric residual volume ranging from 50 ml to 200 ml However, as yet, there is no agreement on the optimum residual volume.

Effect of surgery on weight

Studies showed that both SG and GB have achived a good reduction in the excess weight (Excess weight is defined as the difference between the actual weight and the idealweight for longevity)  Initial success in bariatric surgery is defined as a >50% loss of excess weight, or 50% EWL. In GB %EWL was at 1and 3 years, 41.4% and 48%, respectively. While in SG it was 57.7% at 1 year and 66% at 3 years. Patients with higher BMI may require a second-stage operation later, in order to lose the rest of their excess weight if their BMI remains >45.

Both of the procedure signeficantely improve or cured the patient co-morbidities and those changed were related to % EWL. In SG After 12 months, 57.8% of the patients wereco-morbidity-free and 31.5% presented only one comorbid condition while in GB More than 63.8% of patients with sleeping apnea improved and 46.9% of them stooped using the CPAP. Table (1) shows the effect of reducing weight on different diseases.

Effect of surgery on the level of serum Ghrelin

Ghrelin, an acylated upper gastrointestinal peptide, is the only orexigenic hormone, where circulating levels decrease with feeding and increase before meals, achieving concentrations sufficient to stimulate hunger and food intake.14 This hormone is primarily produced by the enteroendocrine cells of gastric mucosa and to a lesser extent from the duodenum. The procedure of SG involves resection of the gastric fundus, the predominant part of the stomach in the production of ghrelin, resulting in less stimulation of the hunger center. A recent study by Langer15 compared the ghrelin levels in patients submitted to SG and to GB, showing in patients with SG a significant decrease in plasma ghrelin at day 1 after surgery, confirmed also after 1 and 6 months, in contrast to no change found in patients with GB. Moreover, in patients with GB, the plasma ghrelin levels 1 and 6 months after surgery appeared increased compared with the preoperative levels of the same group.

Complications were reported in both procedures and percentages were reasonable. LAGB is the safest bariatric operation with a mortality of 0.2%, 30-day morbidity of 5%, and delayed complication (gastric prolapse, erosion, port-tubing disconnection) rate of 12%.It has the advantage of complete reversibility by laparoscopic explanation, preservation of anatomy, and ability to perform a SG or other malabsorbative  procedures.

In SG Complications occurred in ~9% of patients included trocar-site problems such as infection, hernia and hemorrhage. Other postoperative complications include urinary tract infection and atelectasis. Some studies document a leak from the anastemosis site but of major concern and were treated conservatively. In GB and SG mortality was less than 1%.

Both of the procedure are safe and effective in reducing weight with more advantage for SG regarding the weight loss and effect on hunger. It’s clear that GB in the best procedure for people how wants to have a reversible operation, but its not for patients how are concern about a prosthesis in their bodies. SG is superior to GB in super obese and high risk patients.