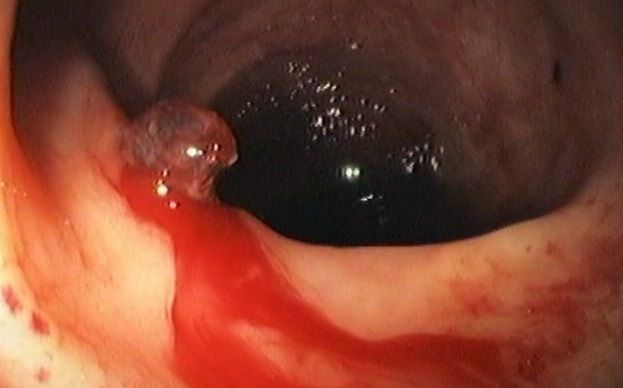 Removal of any polyp–hyperplastic, adenomatous, villous adenoma - is a type of polyp that grows in the colon and other places in the gastrointestinal tract and sometimes in other parts of the body or polypoid–eg lymphoid hyperplasia, lesion by colonoscopy.

Colorectal cancer is the third most common cancer in the United Kingdom with approximately 35,000 new cases diagnosed each year. The lifetime complication of being diagnosed with bowel cancer is about 1 in 20 for women and 1 in 18 for men. Most colorectal cancers are considered to be developed in adenomatous polyps through the adenoma-carcinoma sequence and the removal of adenomas in the course of colonoscopy has been indicated to reduce the next proliferative measures of colorectal tumors.

Decision making about how to perform polypectomy is often made during colonoscopy when a polyp is detected. A general rule is that all potential adenomas should be removed. The endoscopic appearance of a polyp is often not necessarily a good indicator of its histologic nature. While as many as 70% of diminutive polyps may be adenomas, the risk of any particular polyp containing malignancy increases with the size of the polyp. The method chosen for polypectomy is often related to the appearance and size of the polyp. Polyps are usually described as being pedunculated, sessile or flat. The risk of a polyp 2 cm in size or larger being malignant is greater than 10%. Some polyps blur the lines though, by not falling into these strict categories. Nevertheless, consideration of polyp characteristics is helpful in determining the best approach to polypectomy.

Polypectomy is the most frequently carried out therapeutic intervention and all colonoscopists should be capable to done the method safely and efficiently. Practice has become considerably in recent years and there is now a range of equipment and techniques available for different clinical settings. Despite a wealth of clinical experience however, the practical application of polypectomy approaches has been subject to few controlled studies.

Submucosal injection beneath a flat or sessile mucosal lesion arise it away from the muscle layer. This has three potent advantages. Firstly, it recognizes lesions combating or tethered to the deep submucosa or muscle layer that are unlikely to be best for endoscopic removal. Secondly, it raises a flat lesion onto a sessile dome which is more readily ensnared and, finally, lifting the lesion away from the muscle layer reduces the risk of transmural thermal injury as the point of polypectomy is moved away from the muscle layer. Many endoscopists use saline with or without adrenaline but a wide variety of solutions are available and may result in longer lasting cushions. A first injection just proximal to the margin of the lesion is often advantageous as the resulting dome tilts the lesion towards the endoscope making it easier to snare. If difficulty is encountered finding the submucosal layer, starting the injection whilst the needle is still in the colonic lumen may be helpful. As the needle passes into the loose areolar connective tissue of the submucosa, the saline rapidly expands the space producing the characteristic dome. The endoscopist should be liberal with the injection volume, ensuring adequate separation between the lesion and the muscle layer.

Before performing EMR, the endoscopist should clearly identify the margins of the lesion in order to avoid incomplete resection. The application of indigo carmine may help and some recommend marking the periphery of the lesion with electrocautery spots. A barbed or toothed snare may be used to gain additional purchase on the resulting dome. Reducing wall tension by aspirating air also helps to draw the lesion into the loop of the snare. Some recommend taking a rim of normal tissue with the lesion. The entrapped lesion should be moved to ensure the muscle layer has not been snared and then diathermy applied in the usual way. Cap-assisted techniques are available but are used only in special circumstances.

It is important to remember that most polyps identified at colonoscopy will never cause the patient harm. In most cases the adenoma-carcinoma sequence progresses slowly. The endoscopist should therefore always consider the likely natural history of the lesion, the age and co-morbidity of the patient and the risks of the intervention, prior to the procedure. However, the malignant potential of individual polyps is never known and even small/diminutive polyps can occasionally harbour cancer. It is therefore advisable that all polyps (even diminutive rectal polyps) should be removed unless they are obviously non-neoplastic.

Complications may become apparent during or immediately following polypectomy. Patients should be made aware that complications may present after they have left the endoscopy department and should be given written instructions detailing who to contact should unexpected symptoms develop. Polyp surveillance is an essential part of management. The patient and primary care physician should be sent clear guidance once the results of the histological analysis are available.

Polypectomy is the most commonly performed endoscopic therapy and all colonoscopists should be able to perform the procedure safely and effectively. Practice has evolved considerably in recent years and a range of equipment and techniques are available for different clinical settings. Although most pedunculated and sessile lesions are easy to detect during careful withdrawal, flat and depressed lesions often have subtle appearances and may be easily overlooked unless the endoscopist is vigilant. Prior to polypectomy patients should be aware of the risks and consequences of perforation and bleeding.