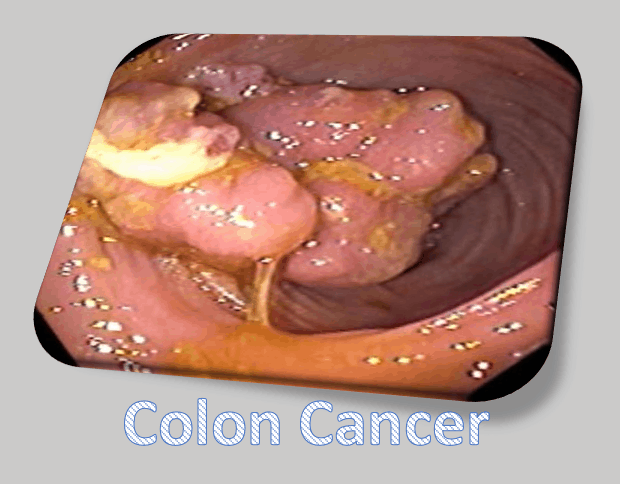 Colorectal cancer, also known as colon cancer or large bowel cancer, includes cancerous growths in the colon, rectum and appendix. With 655,000 deaths worldwide each year, it is the fourth most typical form of cancer in the usa and also the third leading reason for cancer-related death under western culture. Colorectal cancers arise from adenomatous polyps in the colon. These mushroom-shaped growths are usually benign, however , many develop into cancer over time. Localized colon cancer is generally diagnosed through colonoscopy.

Regional signs and symptoms are more likely when the tumor is situated closer to the anus. There might be a general change in bowel habit new-onset constipation or diarrhea even without the another cause, along with a a feeling of incomplete defecation and decrease in diameter of stool; tenesmus and change in stool shape are generally characteristic of rectal cancer. Lower gastrointestinal bleeding, including the passage of bright red blood within the stool, may indicate colorectal cancer, as may the increased presence of mucus. Melena, black stool having a tarry physical appearance, normally happens in upper gastrointestinal bleeding, but is sometimes encountered in colorectal cancer when the disease is located in the start of the large bowel.

A tumour that is large enough to fill the whole lumen from the bowel could cause bowel blockage. This case is characterized by constipation, belly pain, abdominal distension and vomiting. This from time to time leads to the obstructed and distended bowel perforating and causing peritonitis. A sizable left colonic tumor may compress the left ureter and cause hydronephrosis. Certain local effects of colorectal cancer occur once the disease has become heightened. A large tumor is much more likely to be noticed on feeling the abdomen, also it might be noticed with a doctor on physical evaluation. The disease may invade other organs, and could bring about blood or air in the urine (invasion from the bladder) or genital discharge.

What is the influence of colorectal cancer on men and women?

Colorectal cancer affects an equal number of men and women. Women should think of CRC as a disease affecting women and should be aware of important information about screening and preventing colorectal cancer that could save their lives.

How can a Colon cancer be prevented?

Colonoscopy may detect polyps. Removal of these polyps results in a major reduction in the likelihood of developing colorectal cancer in the future. It is a preventable disease.

How a colonoscopy screening exam conducted in a hospital?

A colonoscopy screening exam is almost always done on an outpatient basis. A gentle sedative is usually given before the procedure and then a bendable, slender tube is inserted into the rectum to look inside the colon. The test is secure and the procedure itself normally takes less than 45 minutes.

Who should be screened for colorectal cancer or polyps?

Even if all men and women are not experiencing problems or symptoms should be screened for colorectal cancer beginning at age 50.

What are the tests followed to detect colon cancer?

To detect colon cancer following tests are done 1) digital rectal exam, 2) stool blood test, 3) flexible sigmoidoscopy and 4) colonoscopy. These tests are used to screen for colorectal cancer even before there are symptoms. Patient should talk to his/her physician about which test suits best for him/her.

Beginning at age 50, men and women should have: