The very first IVF baby, Louise Brown, was born inside a natural cycle IVF of the woman who had bilateral tubal block making IVF the only option for having a young child. The final Thirty years has seen astounding progress in neuro-scientific assisted reproductive technology. Today because of IVF, tubal disease and tubal factor infertility is definitely overcome.

It is now established fact that a hydrosalpinx can have adverse effects on pregnancy rates in women who wants to go with in vitro fertilization. As success rates with in vitro fertilization have improved dramatically over the past few years after laparoscopic surgery intervention. Laparoscopic surgical repair of the fallopian tubes holds less appeal. If the diseased tube is not removed the concerns over re-infection of a hydrosalpinx and problems with fluid build-up with fertility drug therapy have raised the stakes for a hydrosalpinx. 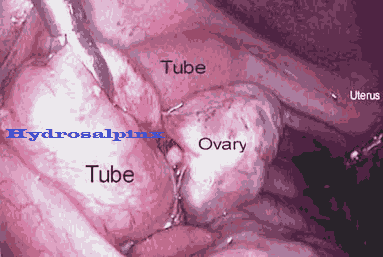 Laparoscopic removal of a damaged tube which has hydrosalpinx reduces the risk of complications of therapy and improves success rates with in vitro fertilization techniques. A hydrosalpinx is really a fallopian tube that is filled with fluid which may be sometime toxic. Problems for no more the fallopian tube, the ampulla, and its delicate fingers, the fimbria, causes no more the tube to shut. Glands inside the tube produce a watery fluid that collects inside the tube in due course of time, producing a sausage shaped swelling that's sign of hydrosalpinx. Reasons for hydrosalpinx is still debated. The tubes are prone to injury very rapidly and the fimbria would be the delicate fingers that extend from the funnel-shaped end of the fallopian tube towards the ovary. The fimbria actively search out the egg after it's released, or ovulated, and carry the egg to the waiting sperm inside the fallopian tube. The fimbria are lined with delicate cells which contain the actively moving hair-like cilia, which move the eggs and sperm together. With injury, not just would be the fimbria themselves injured and fused together, but the delicate lining cells are lost. Fluid collects inside the closed tube.

A normally rich and supportive tubal environment becomes the dead sea from the hydrosalpinx. Hydrosalpinx is because of problems for the tube, usually from contamination. The classic causes of hydrosalpinx are chlamydia and gonorrhea infection, which could run undetected in many females for many years, slowly injuring and destroying the fragile fimbria. IUDs, endometriosis, and previous abdominal surgery sometimes are associated with the problem. As a response to injury, body of female rushes inflammatory cells into the area, and inflammation and later healing lead to loss of the fimbria and closure of the tube. These infections usually affect both fallopian tubes, and although a hydrosalpinx can be one-sided, the other tube around the opposite side is usually abnormal. When it's detected, the tubal fluid usually is sterile, and does not contain an energetic infection.

Besides a hydrosalpinx cause infertility, additionally, it may reduce the rate of success of fertility treatment, even those treatments that bypass the fallopian tubes. The blocked fallopian tube can communicate with the uterus, and the fluid within the tube can be expressed out of the tube in to the uterus. This fluid is probably somewhat toxic to early embryo development, and certainly offers an unfavorable environment for female reproductive system. The big volume of the fluid flows into the uterus and may produce enough flow that embryos find it hard to attach, since they don't have any capability to move from the tide. Fertility drugs may cause the fluid to develop within the tube, because the tubes are attentive to the ovarian hormones produced during fertility drug therapy.

The adverse effects in the presence of a hydrosalpinx:

Role of Laparoscopic Salpingectomy in Hydrosalpinx:

The outcomes of prospective randomized studies on salpingectomy in females with hydrosalpinges are now forthcoming and greatly assist the debate on whether or not IVF will benefit from salpingectomy. In a study by Strandell et al, the proper diagnosis of hydrosalpinx is made by a previous hysterosalpingography (HSG) or diagnostic laparoscopy, after which reconstructive surgery had been rejected. The patients were divided into groups, IVF after salpingectomy and IVF cycle without removing the hydrosalpinges. The authors reported the end result of the first IVF cycle and figured salpingectomy could be suitable for women with hydrosalpinges, particularly those enlarged enough to be visible on ultrasound and in particular for all those affected bilaterally. These studies have led to the Cochrane library recommendation of salpingectomy for hydrosalpinges. Although there's clinical evidence supporting the causative role from the fluid itself, there is a lack of education as to how the fluid exerts its negative effects. It's generally thought that the fluid holds a key position in impairing the implantation potential.

There is suggestion that sonographically visible hydrosalpinges and female who is affected bilaterally have a poorer prognosis compared to those seen incidentally at laparoscopy. Nevertheless there is clinical evidence supporting the causative role from the fluid itself, there's a lack of education as to the way the fluid exerts its unwanted effects. It is generally thought that the fluid holds a key position in impairing implantation potential.

Hydrosalpinx is a very common reason for female infertility. Lower implantation and pregnancy rates happen to be reported in women with hydrosalpinges. How hydrosalpinx exerts its negative effect on the implantation process isn't clearly understood. It's intriguing that there is an effective treatment (salpingectomy) because of its management, but we don't know how and why it really works. It is not only of academic interest to understand this, it's also of clinical value. In women who are identified to have hydrosalpinges during controlled ovarian stimulation, during IVF, aspiration of hydrosalpinges during oocyte collection may be good at improving pregnancy rates. Laparoscopic Salpingectomy fits nicely into diagnosing and control over the hydrosalpinx.