Axilloscopy is the method, mainly used for the treatment of breast cancer by removing the axillary lymph nodes. During the treatment of Breast Cancer, one of the issues that have to be addressed is the management of the axilla. Axilla has the lymph nodes that drain the lymph from the Breast. Spread of cancer takes place by these lymphatics. Hence it is of paramount importance to know whether these lymph nodes in the axilla are involved with cancer or not. This determines the type of surgery, need for axillary surgery, need for chemo and radiotherapy. The various methods to find out that are; Needle biopsy of an enlarged lymph node, surgical removal of sentinel node, Full axilla surgery and Axilloscopy. 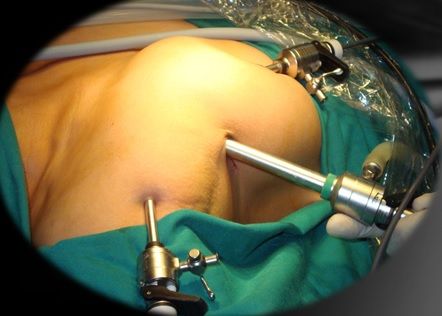 An overview to the breast cancer:

Breast cancer affects one in eight women during their lives. Breast cancer kills more women in the United States than any cancer except lung cancer. No one knows why some women get breast cancer, but there are a number of risk factors. Risks that you cannot change include:

Other risks include being overweight, using hormone replacement therapy (also called menopausal hormone therapy), taking birth control pills, drinking alcohol, not having children or having your first child after age 35 or having dense breasts. Symptoms of breast cancer may include a lump in the breast, a change in size or shape of the breast or discharge from a nipple. Breast self-exam and mammography can help find breast cancer early when it is most treatable. Treatment may consist of radiation, lumpectomy, mastectomy, chemotherapy, axilloscopy and hormone therapy.

It is indicated that Axillary clearance is an integral part of breast cancer surgery. Biopsy of lymph node tissue helps in the staging of breast cancer, providing reliable prognostic information and identifying patients who will benefit from systemic therapy.

Traditionally, surgeons removed lymph nodes for staging under direct vision through an incision in the axillary skin; however, this procedure has side effects including wound infection and lymphoedema. Two operations are standard practice. The first involves clearance to level one, two, or three of the axilla taking up to 20 lymph nodes which provides very accurate diagnostic information. The second requires sampling of a minimum of 4 lymph nodes, which causes less morbidity but provides only qualitative rather than quantitative information regarding the status of the axillary basin of lymph nodes. Endoscopic techniques, sometimes combined with liposuction have been developed to provide a minimally invasive technique A new procedure is sentinel node mapping, which requires the use of imaging and specific training.

In endoscopic axillary lymph node removal, very small incisions are made in the axillary skin and removes the lymph nodes using an endoscope. The patient is placed in a supine position under general anaesthesia. Liposuction is used to remove excess axillary fat. An endoscope is inserted through the incision used for liposuction, and trocars introduced through two additional small incisions. Step-bystep, fibrous tracts and small lymph and blood vessels are coagulated and cut, and lymph nodes carefully freed and removed. Following a saline rinse of the surgical field the incisions are sutured. Drains are not normally required in the axilla.

Efficacy of the treatment:

In one randomised controlled trial the operative time for endoscopic axillary lymph node removal was found to be significantly longer than for open surgery, the mean times being 61 and 33 minutes respectively. Another randomised controlled trial found no significant difference in operative time between axilloscopy (168 minutes) and open surgery (155 minutes) amongst 22 women undergoing quadrantectomy. One quasi-randomised study found good shoulder-arm mobility at 7 days postoperatively with more than 90% mobility being achieved following either axilloscopy or open surgery. However, only 18% (7/40) of axilloscopy patients reported pain on the first postoperative day compared with 33% (13/40) of open surgery patients. One small randomised controlled trial found that all ten patients reported no pain at 3 days following endoscopic axillary removal. Length of stay following axilloscopy was found to vary widely from 2.5 days to 9 days, although one study reported that most of the later cases in their series were discharged within 24 hours. Conversion to open surgery was reported in 8% (4/53) of cases in a historically controlled study. However, in a large case series the requirement for conversion was only 2% (2/100) of cases. Two case series reported no axillary recurrence among 100 and 103 cases followed up to 14 and 18 months respectively.

Data on procedure safety were not consistently reported across the studies identified. The incidence of seroma reported following endoscopic axillary retrieval varied widely from 90% (36/40) to 4% (4/100). Similarly, rates of haematoma formation ranged from 16% (16/100) in one case series, through 10% (1/10) and 5% (1/20) in the axilloscopy arms of two randomised controlled trials, to as little as 1% (1/103) in a second case series. This variation may be due to threshold of reporting or operator experience. A case series of women with stage I or II primary breast cancer found port site metastases to occur in 4% (2/52) of patients at 24 months follow up, and lymphoedema in 6% (3/52) of cases at a median 72 months follow up. Amongst other reported adverse events following endoscopic axillary lymph node removal include lymphocoele in 25% (5/20) of patients, and wound infection in 5% (2/40) of patients.

Sentinel node biopsy is a promising technique that allows the axillary status of breast cancer patients to be predicted with high accuracy. Reducing false negative results remains a major challenge for the improvement of this procedure. Furthermore, new techniques are required to achieve axillary clearing with less morbidity in cases of unsuccessful mapping or multicentric carcinoma. It is suggested whether axilloscopy and endoscopic sentinel node biopsy is a feasible procedure for visualization of the axillary space and resection of the sentinel node using endoscopic techniques.

Axilloscopy and endoscopic sentinel node biopsy, following liposuction of the axillary fat, is a feasible procedure that allows identification and minimally invasive resection of the sentinel node with high accuracy. The endoscopic approach might help to minimize the pitfalls of sentinel node biopsy by visualizing the axillary space. In future, it may become a technique that enables minimally invasive axillary clearing when complete lymphadenectomy is required. It is indicated that Axillary clearance is an integral part of breast cancer surgery. Biopsy of lymph node tissue helps in the staging of breast cancer, providing reliable prognostic information and identifying patients who will benefit from systemic therapy.