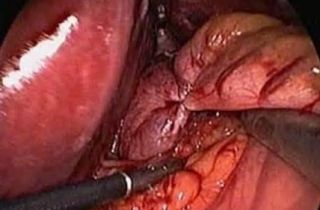 Today Dr R K Mishra demonstrated the steps and technique of Nissen Fundoplication to the surgeons. After learning from him they performed the surgery on the live tissue. Important thing to learn is the patient selection. The patient must undergo 24 hrs Ph. monitoring and it must be established that the lower end of  esophagus is exposed to the acid for longer duration. The manometric studies of the body and lower end of esophagus must indicate the decreased tone of the Gastroesophageal sphicter. The upper G I endoscopy to look for any shortening of the esophagus or any Barret's Esophagus. The conservative medical treatment  may also have failed in the patient.
The doctors learnt the port position. The dissection starts from the Pars Placida. The Crura are dissected, the lower esophagus is dissected of all adhesion s and a sling is passed for traction. The short gastric arteries are divided to mobilise the fundus.  The fundus is pulled in the window to make a floppy Nissen. The crural approximation is done with non absorb able sutures.  The fundus is completely wrapped over the lower esophagus.  First stomach to stomach suturing is done followed by stomach esophagus stomach suturing. The stomach wraps over the lower 3-5 cms of esophagus