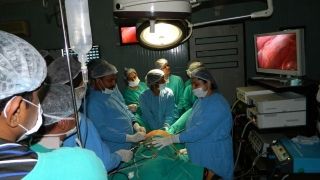 In appropriate cases, anastomosis of the mid portion of the fallopian tube holds the greatest promise of success. The anastomosis can be isthmic-ampullary or ampullary-ampullary. .. Portions of occluded tube (in 2-mm sections) are repeatedly resected, first proximally and then distally, until the tubal lumen is identified in the proximal and distal stumps. Patency of the stumps is confirmed with retrograde chromotubation (proximal stump) and by threading a piece of thin suture from the fimbrial end toward the area of anastomosis (distal stump).
An anchoring suture is placed in the proximal and distal mesosalpinx to bring the 2 portions of the tube being anastomosed in proximity. Four interrupted sutures are placed at the 12-, 3-, 6-, and 9-o'clock positions, parallel to the axis of the tube, first within the muscularis and subsequently on the serosa, to bring together the proximal and distal portions of the tube.
Strict adherence to the principles of microsurgery improves the results of tubal recanalisation.  The use of crushing instruments, such as clamps and traumatic graspers, should be minimized to prevent tissue ischemia. All instruments must be fine and atraumatic, and only fine microsutures (eg, 8-0, 10-0) with tapered needles should be used on the fallopian tubes.
The drying of peritoneal and serosal surfaces is prevented with the use of continuous irrigation with warm isotonic fluid (eg, Ringer lactate solution). Minimal handling of the tissues decreases inflammation and adhesion formation. Postoperative adhesions can be decreased with the use of adhesion prevention barriers, such as oxidized regenerated cellulose .
Any suggestion of pelvic infection in the postoperative period requires aggressive antibiotic treatment because infection can result in adhesion formation and reocclusion of the fallopian tubes. Traditionally, pelvic rest (ie, no intercourse, nothing intravaginally) has been recommended during the first postoperative month in an effort to protect the reproductive organs during the healing period
Perform a hysterosalpingogram 3 months after tubal reconstruction. If the tube(s) is patent, the patient is allowed 1 year to achieve pregnancy before further evaluation and treatment is warranted.
When indicated, manage other correctible infertility factors during the first year following surgery. For example, treat oligo-ovulatory women with ovulation induction to improve the chance of pregnancy. Perform intrauterine insemination in women with cervical infertility and to treat mild-to-moderate oligospermia.
Women who have undergone tubal reconstruction are at a higher risk of ectopic pregnancy. Early evaluation of a pregnancy is critical to determine the site of implantation. Ectopic pregnancies identified early are small and can be managed more safely and easily. Women should be advised to contact their doctor within the first 2 weeks of a missed period. A vaginal ultrasound at the sixth week of gestation should identify an intrauterine sac, if present. If not present, the ectopic pregnancy should be managed medically or surgically as indicatedIf the postoperative hysterosalpingogram demonstrates bilateral tubal occlusion, refer the patient for IVF. The fallopian tubes are so delicate that repeated surgeries generally worsen the chances of success
Most pregnancies following tubal reconstructive surgery occur within a year of the procedure. The length of the tube following reconstructive surgery is directly correlated to success in terms of subsequent pregnancy. The prognosis of the surgical repair of hydrosalpinx with a diameter greater than 3 cm is very poor. The amount of pelvic adhesions and damage at the time of surgery is inversely correlated to the success of tubal reconstruction.