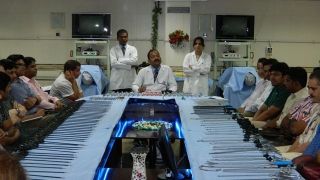 Today was the first day of Fellowship and Diploma in Minimal Access Surgery course batch August 2014. Surgeons and Gynecologists were very excittend to learn this new skill. Patients nowadays know very well the advantages of laparoscopic and robotic surgery. And they are in present era asking for it. We know that as a surgeon and gynecologist you are aware of the benefits, too. In a recent study of practicing general surgeon, urologists and gynecologists, doctors were asked what the preferred mode of access would be for themselves or for their spouse. The response was overwhelmingly in favor of laparoscopic cholecystectomy, laparoscopic appendicectomy, laparoscopic hernia and laparoscopic hysterectomies. Question is what you would want for your family. And it is same what you should want for your patients. Patients want a procedure that will result in less pain, a shorter hospital stay, early return to work, and smaller scars. If you can not do laparoscopy the patient going to find someone who can.
It is a full international batch where surgeons and gynecologists from 16 countries are admitted. Generally we take admission of only 40 candidate in one batch but due to the request of the chief minister of uttarakhand this time we took couple of extra admission. Today Prof. R.K. Mishra has taken first presentation of Introduction of Minimal Access Surgery followed by there was session of instrument design.