Ureteral injury during pelvic laparoscopic surgery is a known complication and it had morbidty depending on the time of their recognition. The incidence of these injuries are 0.5-2 % and most of these complications happened with gynaecology, endourology and general surgery operations. The risk factors precipating more injuries. Diagnosis of these injuries determine the out come, if diagnosed intraoperative repair should be done immediately. Late detection had bad morbidty and loss of some of renal functions. Ureteral injury can be prevented and reduced by more training and learning for surgeons and meticulous laparoscopic techniques. Laparoscopic ureteric injuries repair became popular by experience laparoscopy surgeon. Remute ureteral injury due to over cooking with the diathermy close to the ureter should be avoided.

A literature search was performed using search engine Google and library facility available at Laparoscopic hospital in New Delhi and Springlink search. The following term were used in the reach ureteral injury, laparoscopic ureteral injuries, and laparoscopic pelvic surgery ureteral injury. Selected papers were screened for further references. Criteria for selection of the literature were number of cases less than twenty was excluded. Methods of analysis "statistical and non statistical". Operative procedure only universally accepted procedures and institution where the study was done specialized for laparoscopic surgeon.

Common site of Ureteric injury is the lower third during

Immediate and early diagnosis determines the outcome following the injury.

Cystoscopy and retrograde help in diagnosis by detection of extravasation. While Urteroscopy visualized perforations. IVU Visualized any extravasation or obstruction due to suture tie. Ultrasound and CT abdomen detect any intra abdominal collection or hydronephrosis.

Surgical Treatment for Ureteric Injury depends on time of Recognition

A. Intra Operative: Immediate Repair should be done eg; 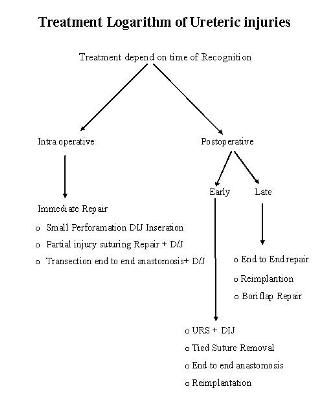 Revision of literature was done for ureteral injuries during laparoscopy pelvic surgery. The article revised was published by know centers and institute and universities incidence and risks factors and time of Recognition of the ureteral injury and type of repair done was the centre of discussion in all papers. In France Leonard frank study 1300 case post laparoscopic hysterectomy and concluded that rate of ureteral injuries was comparable to open hysterectomy and prevention of these complication by improving the surgeons experience. In another article Charles chaperon revised the laparoscopic complication of 29966 cases of pelvic laparoscopic surgeries for complication of surgery during laparoscopy and he stated awareness and good laparoscopic experience will prevent and reduce the complication and early diagnosis always followed by less morbidity and good out come. Raut.V, from Bombay made retrospective study for 296 case who had pelvic operation with complication injuries of 15 in urinary bladder and 2 in Ureter. Concluded awareness of gynaecology surgeon reduces the incidence of Ureteric injuries. Matani from Jordon revised 42 cases seen in his department with Ureteric injury following pelvic surgery. His research ended with the fact that early Ureteric injury discovered the better outcome. Adhout from France revised Ureteric injuries in his centre in 24 cases Reported during laparoscopy. He mentioned most of the injuries done by gynecology in pelvic surgery and time of detection is essential in the plan of treatment. Serglori from USA made his study in value of intra operative cystoscopy for all case of laparoscopic Hysterectomy and he found all injuries in his series which are 118 cases were detected intra operative and repair done in the same surgery so he recommended intra operative cystoscopy for laparoscopic hysterectomy specially in difficult cases. In all Papers 1/3 of the injuries discover intraoperative. This risk factor shared in most of the injuries. Recently the usage of fibreoptic Ureteric probe makes the identification of Ureters very easy during surgery specially in difficult cases.