The automating knotting and suturing device has always fascinated the surgeon and gynaecologist but at present there is no such good device exists. To eliminate cumbersome extracorporeal knotting, a new automatic endoscopic suturing device has been designed and its clinical trial has been conducted at World Laparoscopy Hospital. The efficacy of the new device was tested on the animal model followed by selected patient and was compared with the initial extracorporeal knotting version exist in the market. 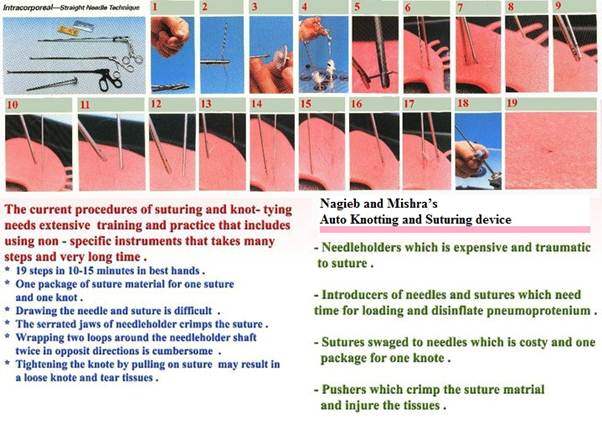 The Nagieb and Mishra’s invention of endoscopic automatic suturing and knot tying instrument creates new opportunities for performing advanced endoscopic surgery without any hassle. The present prototype represents significant improvements in the ease of operation and the security of the suture, bringing the technique closer to clinical use for a variety of applications.

The development of Nagieb and Mishra’s Automatic Knotting and suturing device is a revolutionary product which will start a new era of laparoscopic suturing and knotting. This instrument increases the dexterity and helps even a novice surgeon and gynaecologists to build up surgical competence. 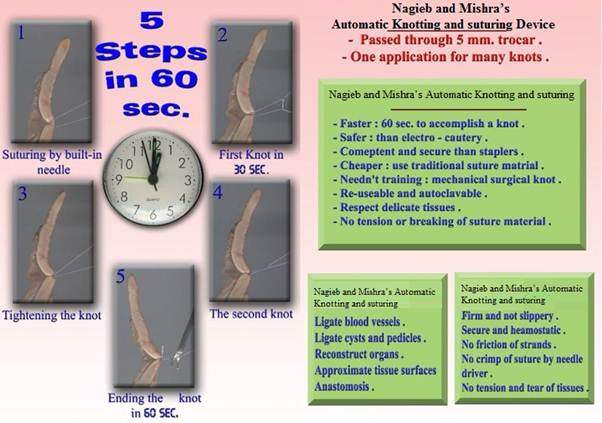 Dr. Nagieb M. Sh. Soliman and Prof. R.K. Mishra has worked hard together to develop this automatic laparoscopic knotting and suturing device so that even the surgeon who even don’t know this highly skilled surgical task can apply knot during laparoscopic surgery within minutes and will add the advantages of reducing the operation time and cost. This device is only one instrument which can be used through a single port and can do multiple sutures and knots in one application.

No clips or loops, and no requirement for instrument triangulation, the versatile 5mm instrument allows surgeon and gynaecologists to set and adjust the surgeons knot forward for desired security through a single port during tissue approximation, ligation and fixation. The thread is hooked on the projected hinge of the instrument, which resembles the just conventional knot passer. By using this instrument, the laparoscopic knot tying becomes easier for not only well experienced but also less experienced surgeons. 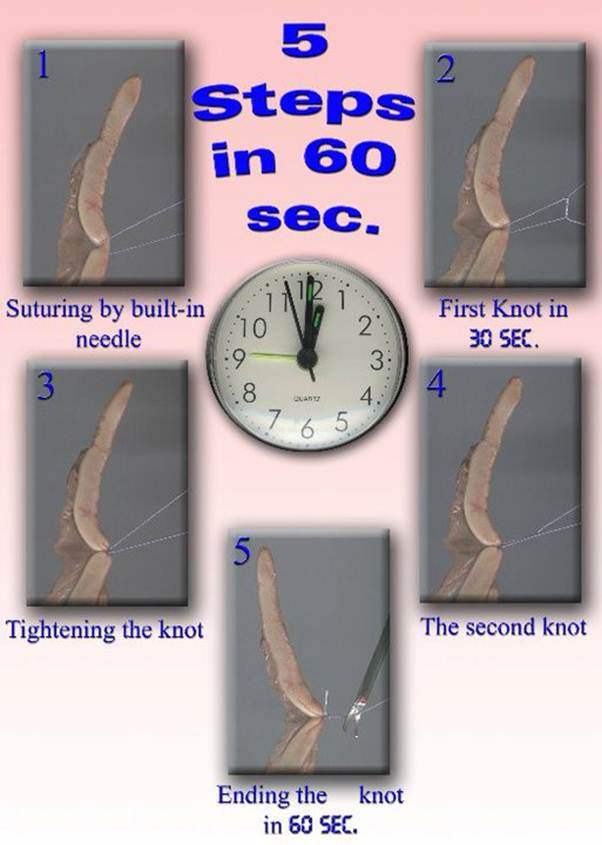 This automatic surgical knot pusher device comprises a thick-walled cannula or tube having a bevelled tip and a central channel for slidably receiving one end of a suture and the other end of the suture is outside through port and is inserted in longitudinal grooves formed on the outer surface of the cannula which intersect the elliptical face at the opposite ends of its major axis. One of the longitudinal grooves extends along the longest portion of the cannula and the other longitudinal groove extends along the shortest portion of the cannula. As the knot pusher device is inserted into a surgical port, a knot formed in the suture is engaged by the bevelled face and advanced toward a surgical site. A notch is formed at the proximal end of the cannula for receiving the end of the suture threaded into the central channel. A threading element comprising an elongated rod with a deformable loop is provided to thread the suture into the central channel of the cannula. This automatic endoscopic suturing device is provided for manipulating a suture to form a stitch through a tissue within a body cavity.