In children with Hirschsprung's disease, a lack of nerve cells in part of the intestine interrupts the signal from the brain and prevents peristalsis in that segment of the intestine. Because stool cannot move forward normally, the intestine can become partially or completely obstructed, and begins to expand to a larger than normal size. 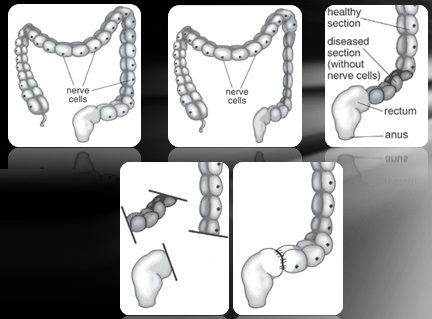 Between the 5th and the 12th weeks of pregnancy, while the fetus is growing and developing, nerve cells form in the digestive tract, beginning in the mouth and finishing in the anus. For unknown reasons, the nerve cells do not grow past a certain point in the intestine in babies with Hirschsprung's disease.

Preparation for Laproscopic Management of Hirschsprung's Disease contained the administration of preoperative oral and intravenous antibiotics in line with the regular practices with the surgeon. Infants are positioned transversely about the operating table, using the surgeon performing the laparoscopic element of the procedure standing across the patient ’s head. Teenagers they fit in stirrups, with the surgeon standing to the correct side in the patient. Infants usually are not catheterized; the bladder is emptied using Crede’s maneuver. The sufferer of Laproscopic Management of Hirschsprung's Disease is prepared and draped in the nipples for the toes. Pneumoperitoneum is secured utilizing a Varess needle inserted with the umbilicus. Pressures of 12 cm H2O are well tolerated in all age groups. Modest hyperventilation prevented hypercarbia. A 4-mm 30° scope is used in infants as well as a 5-mm 30° scope in teens. The trocar site for the scope was placed just beneath the liver edge and also to the proper with the falciform ligament. Trocars will also be placed in the right lower quadrant and left upper quadrant from the abdomen. These ports are 4 or 5 mm in diameter, with respect to the height and width of the person. A suprapubic trocar is used in a few patients to offer retraction of pelvic structures and also to hold the colon in traction during laparoscopic dissection of the rectum.

After placement of the trocars, the transition zone is identified visually. A seromuscular biopsy is obtained with laparoscopic scissors for histologic leveling. A window is made between patient's colon and also the superior rectal vessels. These vessels are divided with monopolar or bipolar cautery in infants or ultrasonic scalpel in older children. The aganglionic segment of intraabdominal colon will then be dissected circumferentially, keeping near the rectum. The avascular plane behind the rectum is dissected bluntly. The rectum is dissected anteriorly One or two cm underneath the peritoneal reflection. The anterior and posterior planes are then joined, hugging the rectal wall.

After the endoscopic dissection from the colon and rectum have been completed, the perineal dissection begins by placing six to eight traction sutures to evert the anus and expose the rectum. A circular incision is created within the rectal mucosa Ten to twenty mm higher than the dentate line. Fine silk traction sutures they fit inside the proximal lip with the exposed mucosal edge, creating a circumferential submucosal plane, that is further developed using blunt and sharp dissection. Larger vessels are cauterized within this dissection.

After Laproscopic Management of Hirschsprung's Disease, patients remained on nasogastric decompression for 12 hours. Dieting was introduced should there be proof of bowel function. The individual discharges when tolerating a dental diet. Rectal examination is completed 2-3 weeks after surgery. A parent is conditioned to perform routine daily anorectal dilatation in approximately half the patients, according to the preference of the surgeon.