laparoscopic roux en y gastric bypass(LRYGB) has become a standard operation for obesity patients. Obesity is the seventh cause of death in united states, although the benefits of such a surgery are diverse and the surgeons experience with this surgery has increased dramatically, but still with such major surgery complications are still recorded either due to surgical procedure it self or due to the change of alimentary tract physiology and its consequences. This surgery consist of creating a small gastric pouch creating a restrictive effect (alimentary tract) and bypassing the gastropancreaticobiliary secretion distally in food tract creating mall absorption effect (hepatobiliary tract). In this article I sum up most of the literature written complications and our current proposed management off it. 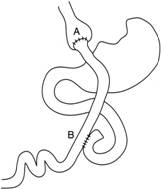 Roux en y gastric bypass surgery was already being done in the 1990s for super morbid obese patient as open surgical technique but with the increased laparoscopic surgical experience it started to gain popularity between bariatric surgical centre around the world specially it has a dual restrictive and mall absorption effect causing sustained late low weight t effect in comparison with gastric banding and vertical gastroplasty.. its also superior to the current available medical therapy so far.

The following parameters were discussed in this article:

Review of articles was done by using high wire press web, Springer Link and library facility available at laparoscopic hospital, The following search terms was used; laparoscopic roux en y gastric bypass, complications, metabolic change, Criteria for selection of papers were upon statistical way of analysis, institute if they were specialized for laparoscopy, the way of management and the technique of operations

Laparoscopic LRyGb was described by wittgrove, clark,and tremblay 1994 ,,creating a small vertical gastric pouch of 5 to 30 ml using linear stapler .treitz ligament is identified and a jejunum is divided 12 cm away with a linear stapler ..a75 to 150 cm of roux limb is constructed to perform side by side jejunojejunostomy by linear endoscopic stapler (Schwartz’s). Many modification of this technique took place since then like using a linear stapler instead of circular to connect the jejunum (roux limb) with gastric pouch ,,other change from retro colic anastomosis to anticolic anastomosis

Anesthetic complication is warranted in such a procedure like prevention of deep vein thrombosis (DVT), slipping of patient , sciatica nerve and brachial plexus injury by extreme abduction and pressure lateral femoral cutaneus nerve and ulnar nerve injury is recorded lipophilic drugs (barbiturates , benzodiazepines) raised peak respiratory pressure ,, increase incidence of atelectasis 45% [22,30, 31,49]. Careful consideration for the sequealae of LRyGb and awareness of the consequences is mandatory. Low molecular weight heparin enoxaparin 40 mg /12h or nadroparin 5700 once daily is protective and not associated with increased incidence of bleeding using graduated compressing stockings to lower limb during after the procedure while patient in bed leg exercise (cycling , stretching) is beneficial, incentive spirometry preoperative consultation with cardiologist and pulmonologist is warranted specialty with patient with many comorbedities [30,31] Suturing of the orogastric tube is recorded during gastroijejunostomy anesthetist should withdraw the tube to adequate level [10]. Hhemorrhage during the procedure is not un common adequate laparoscopic experience would manage such a problem.

A: Leakage is on of the most reported complications in literature .leakage at the gastrojejunal pouch anastomosis is reported to be discovered at the 7 th day post operative while leakage at the jejunojejunal anastomosis is reported to be discovered at the 2nd day (4) (16) . it leads to abscess formation or peritonitis, conservative management for gastric pouch leak by aspiration was more than surgical management, for jejunojejunal leak surgical management was the rule. [7,40]. Omental wrap have been tried in two studies as a protective method and no leak was recorded. Early gastrografin study is the gold standard examination and its being done as standard check up test in 2nd day postoperative nevertheless some studies has challenged this test an its benefits but still most of the literature is advising early test and the radiologist awareness of the new anatomy. Helical ct scan is still a good diagnostic test to detect any leakage. One study is advising that during the curve of learning, cases with a lot of comobidities (hypertension ,apnea, diabetes ) should be avoided by surgeons because the percentage of leak are higher, but experience does not preclude leak. Conflicting reports the relation of the age of the patient and leak complications regarding super obesity no increase in complication rate was detected. One study insist on the utilization of drain as early detection of any leak plus radiology. Endoscopy has been also utilized to a lesser extent to detect anastomitic dehiscence and leak [4,5,6,7,11,14,16,20,29,31,39,41,45,48,57]. B- hemorrhage is an early complication of LRyGb intra luminal and extra luminal ,surgeon should realize this possibility and is usually manifested systemically by tachycardia, drop in blood pressure and recurrent hemoglobin level high level of suspicion should be there. Itraluminal hemorrhage will be discrete if nasogastric tube is inserted perioperatively it could appear in the tube till manifested by Melina. Extra luminal hemorrhage could appear in abdominal tube, jejunojejunl bleeding is difficult to recognize, conservative therapy is the rule if patient is thermodynamically stable. Blood transfusion, stopping low molecular heparin, careful endoscopy for gastric pouch bleeding is recorded in literature and is successful. Selective embolisation is also suggested , application of fibrin glue is widely used laparoscopically. Mallory-Weiss tear is recorded early after excessive retching associated with bleeding [50,47,46,5].

The most common late surgical complications is intestinal obstruction or stricture of the anastomosis:

1-Stricture formation was recorded more with old transmesocolic anastomosis technique specially at the fixation suture, although it happens with ante colic technique, rare long jejunal limb stricture is recorded and thought to be due to ischemia and prolong hypotension, marginal ulcer formation happens and lead to stricture its thought to be ischemic or to undetected ulcer preoperatively (acid production could happen from parietal cell if the gastric pouch was not as small as possible) wish will encourage stomasl ulcers formation ,,stricture was repaired successfully by balloon dilatation endoscopically.

A: volvulus is common in (LRyGb) reported as common as leak around 4% B: adhesions C: internal hernia

internal hernia markedly decreased with anticolic technique , it was more common transmesocolic with retro colic technique ..,,it happens around the roux jejunal limb (anticolic) ,alimentary),,,,,,,other article with large series mention the benefit of coming from left side anastomotic jejunal limb than coming from right side in decreasing number of internal hernia ,internal hernia it happens also paraduodenal ,at foramen of Winslow, pericecal ,intersigmoid. Helical CT scan is a gold standard test , it appears as mushroom shape of hernia ,mesenteric fat surrounded by small bowl loops posterior to superior mesenteric artery,jejunal anastomosis located at right side ..

F: Intussusceptions: Reported postoperatively as far as 4 years but rare

3- Gastro gastric fistulae are common as 6% in one series, late complication discovered incidentally some time by endoscopy thought to be due incomplete separation of the gastric pouch or leak followed by formation of an abscess and followed by fistulisation of the abscess. Its manifested by slow weight loss recurrent nonspecific abdominal pain. [1/2/3/4/9/12/14/16/18/24/28/29/34/41/42]

COPLICATIONS RELATED TO THE MALABSORPTION SYNDROME

THESE COPLICATION IS DUE OF CREATION OF THE MALLABSORPTION EFFECT ITS DIVERSE NOT FULLY UDERSTOOD.

A -Renal oxalate nephropathy post LRyGb is will recorded it may be the cause of oxalate renal stones there is conflicting reports regarding the formation of renal stones some studies denies increase incidence of renal stones ,,but all studies report about the existence of enteric hyperoxaluria ,,other than that less urinary calcium is excreted and less citrate.

B -Bone Many studies monitored calcium metabolism and bone resorption rate. Increase bone resorption rate between 3 to 6 month postoperatively. Decrease in bone mass, osteoporotic patient candidate for LRyGb should be carefully monitored. Calcium supplement are given for almost all bypass surgery as prophylactic.

C -Cholilithiasis Its will known that obese patient are stone formers. All type of bariatric surgery report the increase of gall bladder stone as high as 30% to 40%, the dilemma hear whether to perform lapcholycestectomy (lpc)on a routine base during LRyGb . Which is justified . or wait till patient is symptomatic, although doing (lpc) will increase time of operatio , time of hospitalization and possible intra operative complications on the other hand waiting could increase the complication of gallbladder stone (pancreatitis ,cholycestitis ). Selective management is applicable. Literature advice intraoperative gall bladder ultrasound to detect stones followed by (lpc), no evidence till now that expectant management will increase complications , cholycestectomy is easier to perform post weight loss ,avoid intraoperative complication of (lpc) with a major LRyGb. Some study advocate the use of ursodiol for 6 month postoperatively as protection, still need to estimate the true cost of such approach ,other study relate this practice to the level of bypass or expected weight loss.

D—Nutritional effect, vitamin, electrolyte, iron and folic acid deficiency: Malabsorption syndrome is will known in literature due to many causes other than LRyGb .. magnesium and phosphate deficiency is recorded , lipophylic vitamin deficiency (A,D,E,K) ,B1 ,B12,iron ,folat deficiency ,the consequence of such loss is sever ,,(see below) ,physiologic enlargement of the stoma and change in gut adipocyte hormone (ghrelin,leptin). Patient should be monitored periodically for loss ,,now surgeons give multivitamin , iron ,nutritional supplement routinely, no consensus on specific regime was found [15/17/19 /44/33].

E—NEUROLOGICAL MANIFESTATIUONS ; Aaround 4% developed mononeuropathy (carpal tunnel syndrome ) ,polyneuropathy ,,polyradiculopathy , optic neuropathy ,wernicke encephalopathy , myopathy ,occurred as acute syndromes(around 6 weeks post surgery) but as far back as 6 month to 8 years are recorded .. encephalopathy and peripheral neuropathy are related to vitamin B1 deficiency ,(bariatric beriberi), patient responded to thiamine supplement between 3 to 6 month ,, vitamin B12 deficiency detected almost in 70% of post LRyGb ..Patient..of vitamin B12 deficiency associated with parethesias ,loss of cutaneous sensation ,weakness , decreased reflexes , incontinence, loss of vision, spasticity , dementia, ataxia , psychosis . and. mood swings. Vitamin B1 and B12 deficiencies could lead to irreversible neurological manifestations[37/17/19/21/56]. Myelopathy (posterolateral) occurred late after a decade it was the most frequent disabling problem, folat deficiency ,niacin deficiency : cause hyperkeratosis, hyper pigmentation,desquamation.,glossitis , diarrhea ,fatigue ,hallucinations and encephalopathy. Vitamin D deficiency can cause hypocalcaemia, serum calcium level is observed to be at it lowest normal level, decrease renal calcium excretion .increase bone metabolism manifested as carp pedal spasm ,facial twitching and ophthalmoplegia years after Copper deficiency may cause myelopathy and neuromusculoskeltal symptoms described to rabid fat metabolism is reported but no consensus regarding this syndrome it still need to have hard evidence but changes in gut adipocyte hormone are recorded.

F Psychological disorder; mood swings, psychosis, dementia are described one article is describing a food phobia after one year of LRyGb.