To evaluate the efficacy and complications of laparoscopic Burch colposuspension and tension-free vaginal tape (TVT) in treatment of female stress urinary incontinence (SUI).

Genuine Stress Incontinence is the involuntary loss of urine, which occurs when the intravesical pressure exceeds the maximum urethral pressure in the absence of a detrusor contraction. Stress urinary incontinence (SUI) in women is an entity that presents high prevalence and significant medical, social and psychological consequences. This is a common problem and approximately 20 –30% of women complain of involuntary loss of urine on some occasion during their lifetimes. Many modes of treatment have been devised to rectify the negative impact of urinary incontinence on an individual’s quality of life. These include both medical therapy and surgical procedures. Surgical treatment offers the highest cure rate (85-90%) when compared to medical options. Burch procedure has been the gold standard for operative treatment of urinary incontinence.  In the recent years, trends in gynecological surgery were toward minimally invasive surgical procedures for treatment of female stress urinary incontinence and have been made available for clinical use. It is associated with shorter hospital stay period, lower indexes of complications and faster rehabilitation of patients led to the development of laparoscopic surgery.

In 1991, Vancaillie & Schuessler described the Burch surgery by laparoscopic approach and performed with a technique similar to conventional surgery. In the recent years, laparoscopic Burch colposuspension have become more popular and gives the best chance of surgical treatment of genuine stress incontinence. Use of the laparoscope at colposuspension enables the suprapubic approach to the bladder neck without the need for laparotomy and may confer advantages in postoperative recovery. Advantages of the laparoscopic approach include elimination of the abdominal incision, and better visual access and exposure of the anatomic structures of the space of Retzius. The visual clarity and magnification of tissues gives permission to more precise dissection and refined hemostasis. The patient typically experiences much less discomfort and pain postoperatively, has quicker recovery and shorter hospital stay. Postoperative complications including wound infection, retropubic hematoma, and detrusor instability may be reduced.

In the year 1990 at Scandinavia, Petros and Ulmsten developed a new theory, the midurethra concept, also called the tension-free vaginal tape (TVT) procedure. This was thought to work by providing pubourethral “neoligaments,” which give support to the midurethra so that increased intra-abdominal pressure results in dynamic kinking of the urethra, thus preventing urine loss. [Petros & Ulmsten] The TVT procedure has been performed for about 11 years in North America and more than that across Europe. This is inserted vaginally at the level of the midurethra with exit points suprapubically. Careful adjustment is made to avoid placing the urethra under tension. The Gynecare TVT® (Ethicon, Inc.) uses a monofilamentous type 1 mesh 30 and insertion can typically be performed as day surgery .

To compare the efficacy of tension –free vaginal tape with LBC in treatment of SUI.

A review of literature was performed in February 2008 using search engines: Highwire Press, SpringerLink and Google. The searches used the keywords “stress urinary incontinence”, “laparoscopic Burch colposuspension” and “tension-free vaginal tape”. The queries were subsequently pooled without applying any limits. In addition, other signiﬁcant studies were considered and cited in the reference lists of the selected papers. No statistical analyses have been performed. Data extraction was directly by full text of the publications in the Journals.

The quality of the evaluated studies was limited.  In most papers, tension-free vaginal tape outperformed laparoscopic Burch colposuspension. The study of Paraiso, et al. found that the mean operative time was signiﬁcantly greater in the laparoscopic Burch colposuspension (LBC) group compared with the tension-free vaginal tape (TVT) group, 132 versus 79 minutes, respectively (P 0.003). Multichannel urodynamic studies results in 32 laparoscopic Burch colposuspension and 31 TVT patients showed a higher rate of urodynamic stress incontinence at 1 year in the LBC group, 18.8% versus 3.2% (P 0.056).  There was a statistically signiﬁcant improvement with respect to number of incontinence episodes, weekly pad use, and in Urogenital Distress Inventory and Incontinence Impact Questionnaire scores in both groups at 1 and 2 years after surgery (P < .001).   Times to development of symptoms for stress and urge incontinence were signiﬁcantly earlier in the LBC group (P 0.02 for both symptoms). Postoperative subjective symptoms of incontinence (stress, urge, and any urinary incontinence) were reported signiﬁcantly more often in the LBC group than in the TVT group (P < .04 for each category).  Estimated blood loss, change in hematocrit, analgesia requirement, hospital stay, and number of days to normal voiding were similar between groups. Total hospital cost was comparable between procedures. Complications in both groups were not signiﬁcantly different.

Another study done by Adile, et. al., there were clinical differences between the two methods: procedure time was 60-90 minutes for LBC and < 30 minutes for TVT. Hospitalization was 2 days and 1 day respectively. Anaesthesia given was general for LBC and local for TVT.  Invasiveness was mini for LBC and micro for TVT. The learning curve for doing the procedures: 6 months training for LBC and 15 days for TVT.  Complications: there were 2 cases (3.3%) of hematoma Retzius in LBC and 3 cases (4, 4%) bladder perforations in TVT. Blood loss was absent in both methods. The Foley catheter was removed 3-4 hours after procedures in both groups while in the patients with bladder injuries there was indwelling catheter for 2 days. At 3 months follow-up all patients were completely dry. At 6-36 months follow-up in the TVT group 63 (94%) were continent, 3 patients (4%) had significant improvement, and only 1 (1.5%) failed. In the LBC group, 60 (91%) were continent, 2 (3.1%) had significant improvement, and 5 patients (7.5%) failed. In the TVT group there were 3 patients (4.5%) with de novo instability and in the LBC group, we found 2 patients (3%) with de novo instability at the post-operative follow-up.

A commonly encountered problem with new and promising surgical procedures for treatment of female stress urinary incontinence is the difficulty of predicting the effectiveness of a given treatment over time This article reviews the current literature relating to laparoscopic Burch colposuspension and examines the important issues that require consideration when evaluating any surgical treatment for urinary stress incontinence. Laparoscopic Burch colposuspension has gradually become a part of urogynaecological practice over the past 21 Years but its true place is yet to be established. And with the advent of tension-free vaginal tape in the management of female stress urinary incontinence, the place of laparoscopic Burch colposuspension in clinical practice has become vague.

LBC surgery has been the procedure of choice for many gynecologists and urologists for treating SUI due to the good long-term results observed. It presents advantages such as, making smaller incisions and with better aesthetic results. There is easier access to space of Retzius with improved visualization of the surgical field. There is also minimal intraoperative blood loss and lower requirement of analgesics in the postoperative period.  In addition, there is lower cost, shorter hospital stay and rehabilitation period in many patients. Many authors describe cure rates for laparoscopic Burch surgery similar to those obtained with open technique, however with comparatively shorter follow-up. 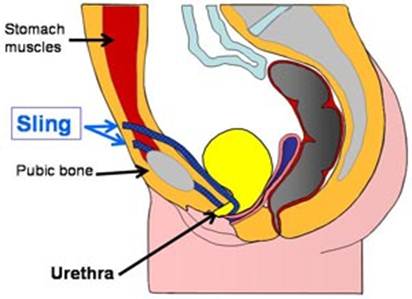 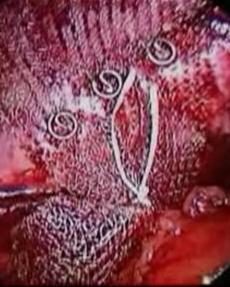 The trial of Paraiso et. al. demonstrates that there was signiﬁcant subjective improvement and patient satisfaction after both laparoscopic Burch colposuspension and tension-free vaginal tape procedure. However, TVT resulted in signiﬁcantly greater subjective cure rates for stress incontinence than the laparoscopic Burch colposuspension. Additionally, more subjects demonstrated urodynamic stress incontinence during urodynamics after one year of surgery in the LBC group than in the TVT group (absolute risk increase 15.6%, P 0.056). Multiple outcome measures were analyzed and conﬁrmed the superior efficacy of the TVT procedure. But the signiﬁcant difference in cure rates does not necessarily imply that TVT is a superior procedure to the laparoscopic Burch colposuspension because patient satisfaction was equally high in both groups. It does seem that the patients in the laparoscopic Burch group were subjectively happier than their urodynamic studies indicated. Most patients in the Burch group had signiﬁcant improvements in number of urine leakage episodes and Urogenital Distress Inventory and Incontinence Impact Questionnaire scores. After 1 year of follow-up, the TVT procedure was associated with signiﬁcantly better results, both objectively and subjectively in the study of Valpas et.al. Subject satisfaction was better after the TVT procedure than after laparoscopic Burch colposuspension. In addition, the TVT procedure seems to be less invasive and requires fewer hospital sources than laparoscopic colposuspension. Persson et al, compared tension-free with laparoscopic colposuspension in their study, in which 2 single-bite nonabsorbable sutures were placed on each side of the urethra. At 1-year follow-up, there was no difference between the objective and subjective cure rates. It was also calculated that the TVT procedure was signiﬁcantly more costly than laparoscopic Burch colposuspension. Sensitivity analyses showed that surgical time and anesthesia fees were major cost-deciding factors. It was stated that, while performing the TVT procedure, the full attention of the anesthesiologist was focused on sedation and the possible conversion of local anesthesia to general anesthesia should be anticipated. Adile et. al. also made a study on the cost effectiveness of the two procedures. They found that the mean hospital cost of TVT is lower than the one of LB. The learning curve for the surgeons is longer for the laparoscopic Burch suspension. Ward et.al. noted that operative complications, like bladder injury, were common with vaginal tape, but the duration of hospital stay and return to normal activity were shorter than colposuspension. Colposuspension was associated with more postoperative complications, in particular delayed resumption of micturition and longer recovery. In the study of Nazli et. al, they concluded that tension free transvaginal tape has modified the treatment of stress urinary incontinence in women. The technique has gained popularity among urogynecologists because of its simplicity, low morbidity, less invasiveness and good short and long-term results. It remains the only effective ambulatory treatment of stress urinary incontinence. Despite all the conclusions derived from the gathered studies, Flock et al. found that there were large single and multicentre studies that indicate an increase in incidence of intraoperative blood loss of 1-2% during TVT procedure. Hematomas also developed in 2-4% of patients after surgery.

It is worthy to take note that there are circumstances in which laparoscopic Burch colposuspension may be the procedure of choice, in spite of the superiority of tension-free vaginal tape procedure. These include the following: if the patient desires future pregnancy (because TVT is contraindicated by the manufacturer in this circumstance); the patient requires concomitant laparoscopic surgery, such as a paravaginal defect repair or gynecologic adnexectomy; the patient has an unrepaired inguinal hernia, has suspected bowel adhesions in the suprapubic area, or has a femoral-femoral bypass graft that would make the blind passage of TVT trocars into the retropubic space undesirable; or the patient does not desire or is allergic to polypropylene mesh. In summary, the tension-free vaginal tape procedure resulted in signiﬁcantly greater subjective cure rates for urodynamic stress incontinence than did the laparoscopic Burch colposuspension in this review. However, patients in both groups were extremely satisﬁed with surgery after 2 years of follow-up.

And lastly, satisfaction rates were both equally high between the groups.  This supports the use of both procedures as acceptable surgical treatment for female urodynamic stress incontinence. 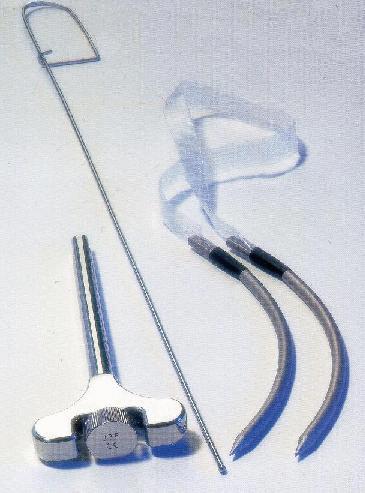 I would like to thank Dr. R.K.Mishra for providing the data for this article review and helping me out in the successful completion of the review. I also thank the journals for their articles and the authors of the articles for sharing their study materials.