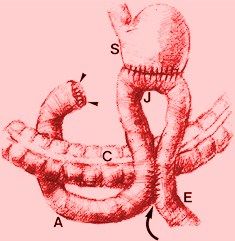 A gastroduodenostomy is really a surgical renovation procedure through which a brand new link between patient’s stomach and also the first part of the small intestine is done.

A gastroduodenostomy is really a gastrointestinal renovation technique. It might be carried out in the event of stomach cancer, a malfunctioning pyloric valve, gastric blockage, and peptic ulcers. Like a gastrointestinal reconstruction technique, it is almost always carried out following a total or partial gastrectomy process. The process is also called a Billroth I process. For benign diseases, a gastroduodenostomy may be the preferred kind of reconstruction due to the restoration of normal gastrointestinal physiology. Several researches have confirmed the benefits of the process, since it preserves the duodenal passage. When compared with a gastrojejunostomy also called Billroth II procedure, meaning the surgical connection from the stomach towards the jejunum, gastroduodenostomies have been shown lead to less modification of pancreatic and biliary functions, plus a low occurrence of ulceration and inflammation from the stomach. However, gastroduodenostomies carried out after gastrectomies for cancer happen to be the topic of controversy. However , there appears to be an absolute benefit of performing gastroduodenostomies over gastrojejunostomies, surgeons have grown to be not wanting to perform gastroduodenostomies due to possible blockage to begin from the surgical connection because of tumor recurrence.

For, gastroduodenostomy particularly performed for the surgical procedures of malignant gastric tumors, to follow the overall principles of oncological surgeries, targeting a minimum of 2 cm of margin round the tumors. However, because gastric adenocarcinomas often metastasize quickly and therefore are locally invasive, it's rare to locate good surgical candidates. Gastric tumors of such patients are thus very rarely excised using a gastroduodenostomy procedure. Gastric ulcers in many cases are given a distal gastrectomy, then gastroduodenostomy or gastrojejunostomy, what are preferred methods simply because they remove both ulcer and also the diseased antrum.

After removing a bit of the stomach, the doctor reattaches the remaining towards the remaining bowel. The Billroth I gastroduodenostomy particularly joins top of the stomach to the duodenum. Typically, the process needs ligation from the right gastric veins and arteries in addition to the circulation towards the duodenum. The lumen from the duodenum and stomach is occluded in the proposed site of resection. After resection from the diseased tissues, the stomach is closed by 50 percent layers, starting in the degree of the lesser curvature, leaving a dent near to the diameter from the duodenum. The gastroduodenostomy is conducted likewise as small intestinal end-to-end anastomosis, meaning a dent created between two usually separate spaces or organs. Alternatively, the Billroth I process might be carried out with stapling devices.

Stomach cancer was the most typical type of cancer in the world within the 1970s and early 1980s. The occurrence rates show significant variations worldwide. Rates are highest in Japan and eastern Asia, but the areas around the globe have high incidence rates, such as Eastern Europe and areas of Latin America. Incidence rates are usually reduced in European countries and also the USA. Stomach cancer occurrence and mortality rates happen to be declining for many decades in many regions of the world.

A gastroduodenostomy is conducted with a surgeon been trained in gastroenterology, the branch of drugs that are responsible for the diseases from the digestive system. An anesthesiologist accounts for administering anesthesia, and also the operation is conducted inside a hospital setting.

If patient’s gastroduodenostomy is conducted for gastric cancer, diagnosis is generally established while using following tests:

Diagnosing of gastric ulcer is generally made with different characteristic clinical history. Such routine laboratory tests like a complete blood cell count and iron studies might help detect anemia that is suggestive of the problem. By carrying out high-precision endoscopy by obtaining multiple mucosal biopsy specimens, diagnosing of gastric ulcer could be confirmed. Furthermore, upper gastrointestinal tract radiography tests are often performed. Preparations for that surgery consist of nasogastric decompression before the administration of anesthesia; intravenous or intramuscular administration of antibiotics; attachment of intravenous lines for administration of electrolytes; along with a way to obtain compatible blood. Suction supplied by keeping a nasogastric tube is essential when there is any proof of obstruction. Thorough medical examination, including hematological studies, might point to the requirement for preoperative transfusions. All patients ought to be prepared with systemic antibiotics; there might be some benefit in washing the abdominal cavity with tetracycline just before surgery.

Important questions a patient should ask a doctor:

A gastroduodenostomy has most of the same risks related to every other major abdominal operation carried out under general anesthesia, for example wound problems, difficulty swallowing, infections, nausea, and blood clotting.

More specific risks will also be of a gastroduodenostomy, including:

Outcomes of a gastroduodenostomy are thought normal once the continuity from the gastrointestinal tract is reestablished.

For gastric obstruction, a gastroduodenostomy is the most radical procedure. It is suggested within the most unfortunate cases and it has been proven to supply great results in relieving gastric obstruction is within most sufferers. Overall, good to excellent gastroduodenostomy answers are reported in 85% of cases of gastric blockage. In the event of cancer, a median survival time of 72 days continues to be reported after gastroduodenostomy following an elimination of gastric carcinoma, although several patients had extended survival times during 3 to 4 years.

After surgery, the individual is delivered to the recovery room where essential signs are monitored. Intravenous fluid and electrolyte treatments are continued until oral intake resumes. Small meals of the highly digestible diet can be found every 6 hours, starting twenty four hours after surgery. After a couple of days, the typical weight loss program is gradually introduced. Treatment of associated gastritis might be continued within the immediate postoperative period.

Regarding ulcer treatment, the requirement for a gastroduodenostomy procedure has declined greatly in the last 20-30 years because of the discovery of two new classes of medication and also the presence of the responsible germ (Helicobacter pylori) within the stomach. The medicine is the H2 blockers for example cimetidine and ranitidine and also the proton pump inhibitors for example omeprazole; these successfully stop acid production. H. pylori could be eliminated from most sufferers having a combination therapy which includes antibiotics and bismuth. If someone needs gastrointestinal reconstruction, there isn't any option to a gastroduodenostomy.