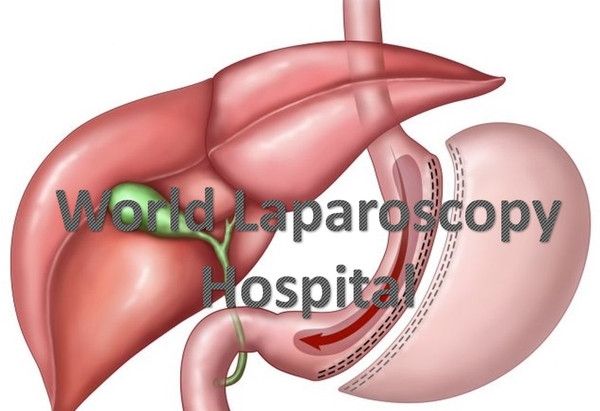 In recent years, laparoscopic sleeve gastrectomy (LSG) has become one of the most commonly used primary bariatric procedures for morbid obesity. While laparoscopic Roux-en-Y gastric bypass (LRYGB) has well documented positive clinical influence on type 2 diabetes, the role of LSG in diabetes treatment is debatable. The main aim of this study is to present our early experience in LSG as a method of bariatric treatment in patients with type 2 diabetes or abnormalities in glucose homeostasis. India has seen a rise in bariatric surgery across all its geographical locations since last 20 years. This study is taken up with the purpose to understand the degree of remission of Diabetes mellitus (DM) in patients undergoing Laparoscopic Sleeve Gastrectomy  surgery (LSG). It is a purposive single centric study done on 37 Indian patients. Rigorous follow up of the patients was done for six months and biochemical assay was done at preoperative level, three months  and six months . Analysis of the data was done through SPSS version 14. Patients showed the remission rate of 52% at Three months  and 72 % at six months. It is imperative that the study should be carried out following the patients for long time so as to access the long term remission rate in Sleeve Gastrectomy  patients.

Obesity is the most important nutritional disorder worldwide. The World Health Organization (WHO) defines overweight and obesity as abnormal or excessive fat accumulation that presents a risk to health. A crude population measure of obesity is the body mass index (BMI), a person’s weight (in kilograms) divided by the square of his or her height (in metres). A person with a BMI of 30 or more is generally considered obese. A person with a BMI equal to or more than 25 is considered overweight. Overweight and obesity are now dramatically on the rise in low- and middle-income countries.(1)

In India, the prevalence of overweight increased from 9.7% near the turn of the century to nearly 20% in studies reported after 2010. According to 2015 statistics published by the International Diabetes Federation, India has nearly 70 million adults living with diabetes, with one million deaths estimated for that year alone. With the prevalence of overweight at nearly 20%, the situation is certain to get worse(1).

are one the most important effects of morbid obesity which lead to severe and chronic reduction in quality of health. High effectiveness of bariatric therapy for weight reduction and treatment of co- Type 2 diabetes and glucose metabolism abnormalities morbidities has been proven in numerous studies (2)

In 1954, Kremen and Linner introduced jejunoileal bypass, the first effective surgery for obesity in the United States. In this procedure, the proximal jejunum was connected directly to the distal ileum, bypassing 90% of the small intestine out of the intestinal stream of ingested nutrients (blind loop). The procedure induced a state of malabsorption, which led to significant weight loss.
However, many patients developed complications secondary to malabsorption (eg, steatorrhea, diarrhea, vitamin deficiencies, oxalosis) or due to the toxic overgrowth of bacteria in the bypassed intestine (eg, liver failure, severe arthritis, skin problems). Consequently, many patients have required reversal of the procedure, and the procedure has been abandoned. This led to a search for better operations.

Drs. Mason and Ito initially developed this procedure in the 1960s. The gastric bypass was based on the weight loss observed among patients undergoing partial stomach removal for ulcers. Over several decades, the gastric bypass has been modified into its current form. Modifications in the original procedures and the development of new techniques led to the following three basic concepts for bariatric surgery: Gastric restriction (adjustable gastric banding, sleeve gastrectomy) Combination of gastric restriction and malabsorption (Rou-en-y Gastric bypass, Mini Gastric bypass and duodenal switch).(3)

Bariatric surgery is the most effective therapy for achieving glycemic control in patients with T2D. Data from a series of randomized clinical trials have demonstrated superiority of bariatric surgery over intensive medical therapy in the management of T2D However, estimates of remission of type 2 diabetes after bariatric surgery are highly variable , ranging from 25% (6) to 83% .
However, in several studies, the resolution of diabetes has often been observed before a significant weight loss has been obtained .The early postsurgical improvement of diabetes suggested a major physiopathological role for changes in gut hormone secretion [18]. As a matter of fact, a decrease in plasma levels of ghrelin, an orexigenic peptide, has been described following gastric bypass for morbid obesity [19–22]. The involvement of other intestinal peptides like GLP-1 (hindgut hypothesis) [23–26] and neuropeptide YY [22, 27–30] or a decreased secretion of anti-incretin hormones (foregut hypothesis) [31, 32] has been proposed to explain the rapid remission of diabetes after bariatric surgery. Otherwise, Roux-en-Y bypass (RYGB) that excludes the duodenum from the nutriments’ route and profoundly modifies the gut microbial metabolic cross-talk [33] has been shown to improve insulin resistance more rapidly than sleeve gastrectomy [15].

Roux-en-Y gastric bypass (RYGB) was performed in more than 90% of metabolic operations in 2003 (13) and has been well studied in subsequent years. Sleeve gastrectomy has become increasingly popular because of its low complication rate, being performed in 36% of metabolic operations in 2012 (14). However, because of its recent adoption, few large or long-term studies have stud-ied remission after the procedure. The study is taken up with the purpose to study the level of remission of Diabetes in patients undergoing Laproscopic Sleeve Gastrectomy (LSG).

An observational single centre study was performed at Asian Bariatrics  Center  , Ahmedabad, India . thirty seven obese Indian patients included in the study underwent LSG. The study was designed to assess the influence of LSG on type 2 diabetes and glucose homeostasis. The primary endpoint was the diabetes type 2 remission, which was described as glycosylated hemoglobin—HbA1c <6% (42 mmol/mol) without the use of diabetes medications.

The average BMI was calculated to be 42.91 Kg/M2 and average of mean blood glucose 216.89 m.mol.  The subjects were studied on baseline demographic characteristics, diabetic status, and clinical and biochemical data were collected preoperatively and postoperatively for three month and six month.

Bariatric surgery has been proven to be an effective approach for the treatment of morbid obesity in adults with BMI > 40 kg/m2 or BMI > 35 kg/m2 with comorbidites .  [2,5,17]. An increasing body of evidence also emphasizes the bariatric surgery benefit for the treatment of the type 2 diabetes in obese patients. Moreover, the new therapeutic algorithms of type 2 diabetes suggest an earlier surgical intervention for increasing the likelihood of remission of diabetes [4, 40]. However, the question of the choice of surgical procedure to be used in this purpose remains yet largely debated and many variations in selection of the surgical technique are observed among obesity care centers. Because randomized studies are scarce and very difficult to realize, until now most statements are issued from observational studies and meta-analyses. In this context, the choice for the surgical procedure remains open according to The International Diabetes Federation (IDF) recommendations [4].

In the study 37 patients of both genders were chosen purposively for the study. All the patients underwent LSG and were followed up for six months. Patients showed an average BMI of 42.91 kg/m2 at the preoperative stage. Patients were kept on early post operative diet of 600-800 Kcal for 2 weeks, followed with pureed and soft diet and finally after 2m the patients were kept on regular diet regimen of 1200 Kcal. The patients were also advised to take small frequent meals (both solid and liquid). The patients were helped with physical activity with varied methods like functional exercise, yoga, gymming, dancing, and abdominal activity. The biochemical investigations were done at 3rd and 6th month and it was observed a variation of 20.62% in BMI over 6m of surgery.

Fig 1: Various in Mean BMI of patients after LSG.

This variation in BMI brought a tremendous change in the quality of life of the patients. The quality of life of the patients was studied by a standardized tool Bariatric Analysis and Reporting Outcome System (BAROS). The analysis of outcomes after bariatric surgery should included weight loss, improvement in co-morbidities related to obesity (DM-Type 2), and quality-of-life (QOL) assessment. Success and failure should be established and the presentation of results standardized for the tool. The mean score of the population calculated was 4 which showed a good quality change in the lifestyle after surgery.

When the Mean Blood Glucose (MBG) was analyzed in the subjects, it was observed that the MBG deteriorated from 216.89 to 169.97 in 3m. The dosage of OHGs and level of insulin reduced in many patients. Further, after 6m the MBG level reduced to 126.78 showing a reduction of 41.54% in the level of MBG, bringing the blood glucose level to almost normal.

Fig 2: Variation in the level of MBG in the patients after 3m and 6m

Change in the level of HbA1c in patients over 3m and 6m was analyzed. It was observed that 59% of patients showed a remission in the first 3m of surgery. Later, the % remission increased drastically to 72%. It is imperative to do further follow up of the patients to understand the remission and re-occurrence of DM in the patients.

Fig:3,  Percentage remission of DM after 3m and 6m of LSG

LSG leads to significant improvement in biochemical glucose homeostasis and can be considered as a method of treatment in morbidly obese patients with glucose metabolism abnormalities. LSG as a method of treatment for patients with clinical type 2 diabetes still needs some further observation. In elderly patients with poorly compensated type 2 diabetes LRYGB should be recommended. Long term observation from double - blinded randomized control trials will be helpful to make the final decision which procedure should be considered in candidates for bariatric treatment.