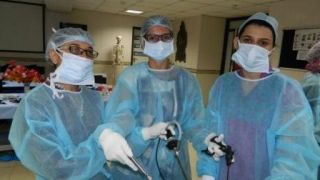 Today on the live tissue the gynecologist performed the tubal sterilisation using the Ring Applicator. They learnt the use of Tritome in performing the Salpingostomy with monopolar current. later the salpingostomy was closed with interrupted intracorporeal Surgeons knot. Ovarian drilling was practised using the Tritome. The laparoscopic Hystrectomy was done using bipolar current for coagulating and cutting the various pedicles of the uterus and then the colpotomy was done using Hook and the monopolar current. The vault of the vagina was closed with laparoscopic extracorporeal Square knots.  Dr Kausar performed the best Laparoscopic Hystrectomy.