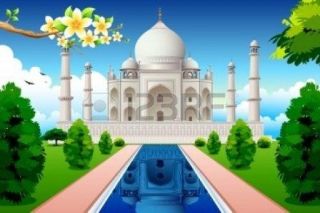 The Taj Mahal is considered one of the most beautiful architectural monuments in the World and was built by the Indian emperor Shah Jahan.

The Emperor had married a girl named Arjumand Begum in 1612 while he was a prince and she was the only one of his many wives whom he truly loved. He gave her the name Mumtaz Mahal or "beloved ornament of the palace."

It is said that the Taj Mahal was built by the Emperor as a tribute for their love. It is what Mumtaz Mahal had told him to do as one of her last wishes while she lay on her deathbed after giving birth to their fourteenth child in 1631.

The Emperor began the construction of the monument six months after her death and had over 20000 of the most gifted craftsmen and artists from all over the world work on it for 22 long years. The tale goes that after the Taj Mahal had been constructed the emperor had the thumbs of all the artists who had worked on the monument cut off, so they would not be able to create another monument like the Taj Mahal.

After the monument had been created the body of Mumtaz Mahal was shifted and placed in it; and when the Emperor died in 1658, he was also buried in it beside his wife.